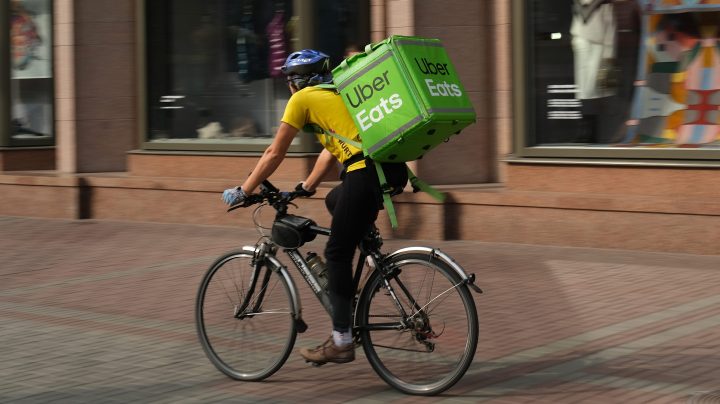 Third-party food delivery apps like DoorDash, Uber Eats and Grubhub were lifelines for restaurants that were forced to close their doors in the thick of the pandemic. But as steep fees associated with the apps cut into already-thin profit margins, some restaurant owners are looking into alternatives.

The average monthly spend on food deliveries in the United States was up 133% between April and December 2020 compared to the same period the year before, according to data analytics firm Earnest Research.

Jon Sewell is co-founder and CEO of LoCo Co-ops in Iowa City, Iowa. As the owner of a pizza and calzone restaurant in Iowa City, Sewell said, he wasn’t happy with the commission rates delivery apps were charging, so he launched a co-op with other local restaurant owners to offer the service. Now, through LoCo Co-ops, he hopes to provide the technology and know-how to establish food delivery co-ops in other cities.

“It’s owned by the people who utilize the services,” Sewell said. “We were able to effectively get about half the market share in our city and drive the cost down from about 30% to well under 10%, and at the same time offering far better customer service.”

Sewell spoke to “Marketplace” host Kai Ryssdal about the alternatives to third-party delivery apps. The following is an edited transcript of their conversation.

Kai Ryssdal: So do me a favor, would you, and tell me what problem you saw with food delivery that you’re trying to fix with LoCo Co-ops.

Jon Sewell: Well, what’s happened over the last years is a new service has been developed to support restaurants, and that is third-party delivery services. It allows them access so they can actually enter new markets and deliver their food to customers. It’s a very good concept, but the problem is that it’s basically been invented by venture capital-backed tech firms, principally in Silicon Valley and Chicago, who are charging rates that are just unsustainable for restaurants to keep their doors open.

Ryssdal: So you being a guy who, we should say, runs a pizza and calzone shop in Iowa, you saw this and you said, “I’m gonna fix it.” What are you doing? What’s your idea?

Sewell: Sure. Well, before I opened the calzone restaurant, I spent 30 years as a hospital executive and used to put a lot of pretty complicated joint ventures and co-ops together amongst hospitals. Never thought I’d use any of the skills that I had accumulated, but I got about 20 restaurant owners together, and we formed our own company, and I refer to it as a co-op. It’s owned by the people who utilize the services, and we were able to effectively get about half the market share in our city and drive the cost down from about 30% to well under 10%, and at the same time offering far better customer service.

Ryssdal: It seems to me to be a long-tail kind of thing, right? If you set aside for a minute the community-minded aspect of what you’re trying to do, right, provide smaller restaurants an option that does not charge them 30% commissions, it does seem there’s plenty of money to be made, even at a 10% margin, if you go to medium and smaller-sized cities and just don’t even deal with the headache of New York or Los Angeles.

Sewell: Ideally, a 500,000 to 700,000 population works best. In fact, you know, a town like Knoxville, Tennessee, it’s a perfect population. It’s got a major university there, and you know, when you find towns with universities in them, you tend to get a more interesting and eclectic mix of independent restaurants. So, the other ideal thing about 500,000 to 800,000 populations is you can get your arms around all the critical, iconic, independent restaurants who you really need to get on board to do something like this. You get into New York, I have no idea how you even begin to do this, but I’m sure there’s people in New York who can figure out how to adapt our model to something like that.

Ryssdal: Well, maybe they’ll give you a call. Let me ask you this, though, sir, and then I’ll let you get back to your day. I imagine that you in the calzone shop when you fired it up, you tried a Grubhub and you said, “I’m not paying 30%.” Right? Is that where this came from?

Sewell: We actually were using one called OrderUp, and they had a great reputation. But in 2017, Grubhub bought OrderUp, which basically gave them a monopoly in Iowa City. That’s when they doubled all the commission rates and fired all the customer staff. That’s what stimulated us to say, “No, that doesn’t work in our community. We need to have a better alternative.” One of the ways I like to look at this is third-party delivery has become a critical piece of infrastructure for any food culture, in any town, and it can’t really reside in the hands of people who are just trying to make money off it. So in essence, what we’re trying to do is turn it into a public utility.