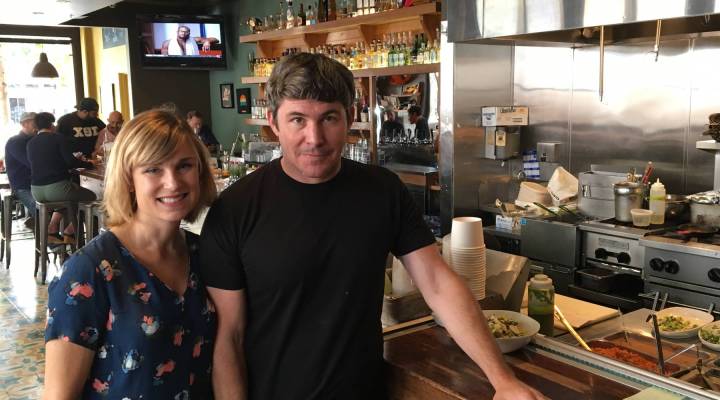 COPY
Sara Deseran and Joe Hargrave have made changes to their restaurant to adapt to third-party apps. Sam Harnett for Marketplace

Sara Deseran and Joe Hargrave have made changes to their restaurant to adapt to third-party apps. Sam Harnett for Marketplace
Listen Now

These days a restaurant like Tacolicious in San Francisco’s Mission District can be really busy but look really slow. That’s because much of the food is now being sent to customers through third-party delivery apps like DoorDash, Uber Eats and Caviar.

These apps are betting the future of restaurant dining is delivery. They are spending billions of dollars in venture capital growing the delivery model and expanding to more restaurants and areas of the country. The increase is changing how we eat and how restaurants have to operate.

Joe Hargrave co-owns Tacolicious. He said the number of lunch customers is down 35 percent this year, but lunch revenue is up 8 percent. That’s because more of his tacos and tortas are eaten off-site. It’s about lunchtime, and online orders continue to spit out of the ticket machine on the counter.

Hargrave said his restaurant can’t afford to ignore these apps. They bring business, but they also bring a whole lot of organizational challenges, said Hargrave’s co-owner and wife, Sara Deseran.

“It’s almost like you are running an entirely different business on top of your business,” she said.

Deseran rattled off a long list of questions about food and management that the couple now has to deal with: “Where will we store the compostable trays? How will that torta travel? How far will it go before it’s dead?”

The apps have already changed all sorts of things about the restaurant. For instance, the app Caviar said its customers wanted food in bowls. So now Tacolicious serves food in bowls. The restaurant also plans to hire someone just to manage all the delivery orders.

“As long as we will be delivering food, which I don’t see that ever ending, then we have to adapt every single thing we do,” Deseran said.

“The basic paradigm of what defines a restaurant in America is being redefined,” said Hudson Riehle, senior vice president of the National Restaurant Association’s Research and Knowledge Group. “The majority, 63 percent of restaurant traffic now is off premises.”

That includes delivery, takeout, drive through and food trucks. Uber Eats is encouraging restaurant owners to go even further — to create new restaurants where customers can only order online.

“We started experimenting with virtual restaurants in Chicago in the beginning of 2017,” said Elyse Propis, who works in restaurant innovation at Uber Eats. “The original concept we tested was poke because we saw that a lot of customers were searching for poke in the Uber Eats app but they weren’t always able to find it.”

Uber Eats has been approaching restaurant owners to offer advice on how to start a virtual restaurant. The company said there are now more than a thousand of these businesses serving all sorts of stuff: chicken wings, burgers, Mexican food, breakfast and brunch, salads — the list goes on.

But what does the business model of third-party delivery do for restaurant profits where margins are notoriously small? Deseran and Hargrave said delivery apps can take as much as a 30 percent cut from each order.

“These are the prices we’re getting while they’re building,” Hargrave said, “but what’s going to happen when they start killing each other off and one reigns supreme and they have to make a profit?”

Hargrave and Deseran own five restaurants, which has helped them negotiate a lower rate with the delivery apps. Smaller mom-and-pop restaurants don’t have that leverage, so some opt not to use the apps at all.

At Tacolicious, Hargrave’s big worry is that he’ll have to compromise his food for delivery — do something like add preservatives to his tortillas to make them travel better. He said they’ve taste tested their food after 20 minutes in a delivery car.

“I didn’t do this to put food into boxes,” Hargrave said. “I like food, but I like giving food to people and seeing them interact with it.”

That, Hargrave said, is why he wanted to open a restaurant in the first place.