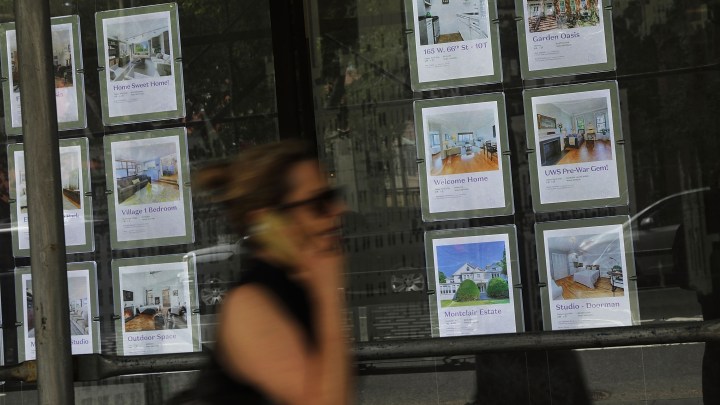 COPY
Luxury apartments are advertised at a Manhattan real estate office. In this seller's market with limited inventory, trying to buy a home can feel like running a marathon. Spencer Platt via Getty Images

Luxury apartments are advertised at a Manhattan real estate office. In this seller's market with limited inventory, trying to buy a home can feel like running a marathon. Spencer Platt via Getty Images
Listen Now

Meet Joydeep Mukherjee and Shyamali Dey. He’s 35, she’s 27. Both work in IT. They got married right before the pandemic and have been living, working and bumping into each other in a 675-square-foot apartment in Jersey City, New Jersey, ever since.

“The living room is our office,” Dey said. “I work out here, I do my makeup here, we watch TV here, we read here. It’s an everything space.”

They started looking to buy a bigger space in September. After a dozen failed bids, they knew they had to go big or they’d never get a home. So, when a four-bedroom house on half an acre came on the market for $525,000, they put in an offer for $675,000.

Searching for a house in this market has in many ways become an endurance sport. With low interest rates fueling high demand, buyers are competing for a limited supply of homes for sale. According to Redfin, about 60% of offers made by its agents in July became part of bidding wars. And while the competition has eased up a bit this summer, with more houses coming on the market, it’s easy for would-be buyers to get discouraged.

About eight months into their search, Mukherjee and Dey were ready to give up.

“You talk about burnout. I mean, they got to the point back in May where they said, ‘Kaitlynn, we’re done,’” said their agent, Kaitlynn Sauer, with Lighthouse Residential.

Sauer knows something about pushing through fatigue.

“I was a pole vaulter, a track runner, did a marathon,” she said. “So the endurance of this, I’m used to.”

She’s also been a coach and has a degree in sports psychology. All that came in handy when her clients were hitting the wall.

“I’ve definitely texted them being like, ‘Guys, we can do this.’ Like, the little pep talks,” she said.

They powered through, and on their 18th try, Mukherjee and Dey finally won. It wasn’t quite the victory celebration you might expect. The process had taken a toll, Dey said.

“I don’t know how to explain it,” she said. “It’s like excitement, yes, but I’m not jumping up and down. I just want to go there already, you know?”

They closed on the house, a midcentury three-bedroom in West Orange, New Jersey, last week.

“I actually tell my clients, ‘In this kind of market, this is not a sprint, this is a marathon,’” said Carmen Micsa, a broker in Sacramento, California

She’s earned the right to use that cliché. Micsa has plaques on her wall from completing the Chicago, Boston and New York City marathons. She’s training for London now. Running a 26.2-mile race is all about pacing and discipline, she said, not unlike representing buyers in this housing market.

“I actually had some marathon clients — they’re good, runner friends of mine — we literally had to make close to 20 offers before we got accepted,” Micsa said.

Turns out the sports-real estate combo isn’t that unusual. Real estate agent Bron Wilkerson is also a sports psychologist, strength trainer and college volleyball coach in St. Louis. He sees a lot of parallels: “Patience, you know, grinding it out, and being able to have the mindset of being flexible and going with the flow a little bit,” he said.

But staying in that mindset can be tough. Buying or selling a house is often emotional. Many of Wilkerson’s clients are dealing with death or divorce.

“I had one client — she was great,” he said. “We did three deals for her, but I always knew, ‘OK, week two, here’s where she’s going to have a breakdown.’”

Wilkerson said his background in psychology, especially, is “worth its weight in gold, just because you’re dealing with people at the end of it.”

Sometimes it’s about knowing when to quit — for athletes and homebuyers. Take one couple who real estate agent Sauer worked with. About two months ago, they told her they just couldn’t keep looking.

“And I said, ‘Stop,’” Sauer said. “’If you don’t need to move, I’m not going to force you. I don’t want you to have to buy something and hate this process. This should be a happy time in your life.’ So now, they’re hanging out with their little kid, and they don’t have to go out every weekend.”

And in the meantime, the market’s loosened up somewhat. Maybe they’ll try again.