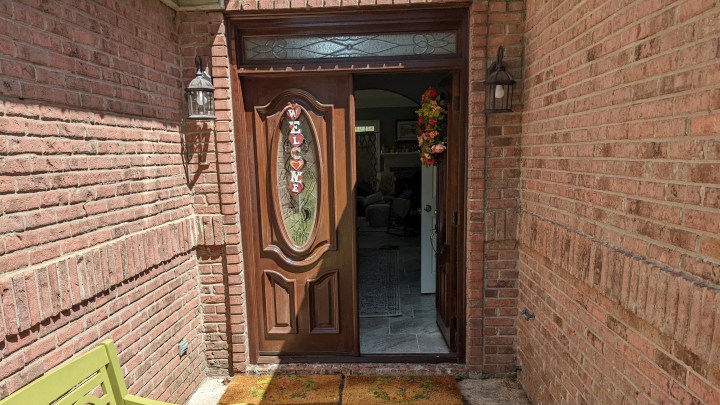 COPY
There are no front steps at Nikki Finlay's new home. "I could walk straight in the front door," she says. Courtesy Nikki Finlay
Adventures in Housing

There are no front steps at Nikki Finlay's new home. "I could walk straight in the front door," she says. Courtesy Nikki Finlay
Listen Now

When it came to finding a new house, Nikki Finlay had a few requirements: Her husband, Mark, had to have a manageable commute, the house needed space for the cats and it had to be accessible.

Finlay, a retired economist living in Oxford, Georgia, injured her neck in 2018,which impaired her mobility and affected many parts of her life, including how she shops. It was also one of the key reasons she and her husband decided to move.

“By 2021, it was causing me a lot of trouble to get up and down the stairs in my house,” Finlay said. “And so we decided to move up our home search.”

But finding a home that’s accessible in an already hot housing market wasn’t easy. According to a 2015 federal study of data in the 2011 American Housing Survey, only 3.8% of U.S. housing met a standard of “moderate” mobility accommodation, meaning the home has grab bars in the bathrooms and no interior steps — or if it does has steps, they include rails.

And for Finlay, bathrooms were a particular concern.

“One thing that became perfectly clear was we need a master on [the main floor] with a walk-in shower,” she said. “No tubs, no craziness like that.”

To hear about Finlay’s housing search and the home she finally moved into, click the audio player above.