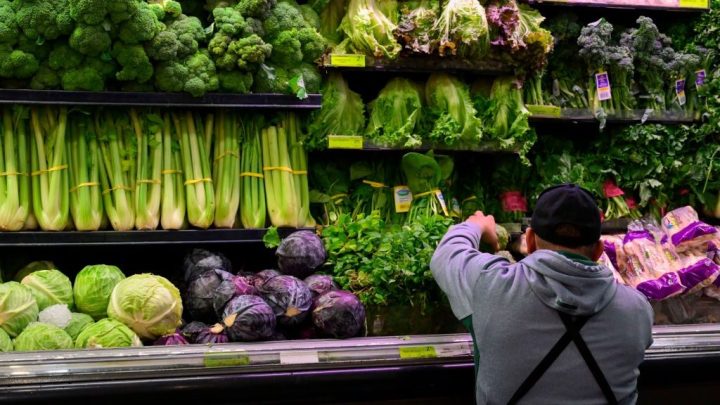 If you toss out food after it passes the date printed on the packaging, you’re not alone. But there’s a catch: That date doesn’t necessarily have a connection to the spoilage of the food.

“They don’t even claim to be expiration dates,” said Vox writer Alissa Wilkinson. “But that’s how we often think about them.”

According to her reporting, they began as a sort of quality control for food makers. The standards that govern food dates vary. “It goes state by state,” said Wilkinson. “If you’re buying something from a big food manufacturer, the date might come from a focus group.”

“Marketplace” host Reema Khrais spoke to Wilkinson about her reporting on the subject. The following is a transcript of their conversation.

Reema Khrais: I am so excited to chat with you because I’m just fascinated by this topic. You wrote about the expiration dates we see on food and how they are, in fact, not expiration dates, right?

Alissa Wilkinson: That’s right. They don’t even claim to be expiration dates. But that’s how we often think about them.

Khrais: What are they?

Wilkinson: For most of them, they’re actually something that often gets called “freshness” dates, or, or “best by” dates. And the idea is that they tell us when the manufacturer or packager or distributor of the food thinks that it will be best tasting, or have the best texture, or something like that. But what they don’t indicate is whether it will hurt you in any way to eat it, if it’s gone a little past the date.

Khrais: So they are not expiration dates, they are like freshness labels. How did they come to be?

Wilkinson: It sort of starts right after World War II. And at the time, there weren’t any dates on any of these foods, but the manufacturer sometimes would put these codes on them that would indicate to the grocer that this was when you might want to rotate your stock. And manufacturers realized that these dates could actually be kind of used as marketing if they were legible to your average consumer. And there have been efforts since then to standardize them in some way across the country, but they’ve never succeeded. So there’s only one federal regulation, for infant formula. That’s an important nutritional thing. But for most other foods, it goes state by state. Sometimes it’s a suggestion or a guideline that, for instance, milk lasts for 21 days, or 14 days.

Khrais: It just varies from state to state. Wow.

Wilkinson: So if you’re buying something from a big food manufacturer, the date might come from a focus group that they did, where they sort of had them eat foods at different stages, and then just sort of pick the one that was the consensus that this is when it tastes most appealing, or where their texture is most appealing. Of course, lots of small manufacturers can’t do that at all. So they’re essentially making it up or making an educated guess. And that’s where most of these dates come from.

Khrais: And I’m sure manufacturers would argue that these labels are legitimate, because they want you to eat something when it tastes its absolute best in order to protect their brand.

Wilkinson: Yeah, that’s exactly right. But, you know, that sometimes makes us think that if we’re eating the food and it’s short coded, that we might be risking our lives or something like that. And that’s simply not true. And the end result of that is that grocery stores end up throwing out an incredible amount of their stock because people won’t buy it. And because they buy more to fill the shelves, because who wants to shop in an empty store? And the end result is, we’re wasting about 40% of the food we produce in the U.S. And at the same time, we have roughly 42 million people who are living with some kind of food insecurity situation. So that’s a big problem. And fixing labels isn’t the only way to fix the problem, but it definitely would go a long way.

Khrais: On a personal level, how has knowing all this changed your own relationship with food and “expiration” dates?

Wilkinson: So I definitely don’t call them expiration dates anymore, or I stop myself when I say it, because I want to actually think about what they are. And I really was a stickler for throwing away anything that was passed the date at any time. And now I am trying to use my senses. I’ll think about it. Like, would this thing actually be a problem? Is this jam going to really be bad if it’s a month out of date? No, it’s not. I’ve been thinking about that a lot, because it’s good for my wallet. But it also hopefully is part of a bigger movement to make sure that we are using the resources that we produce and create really well.