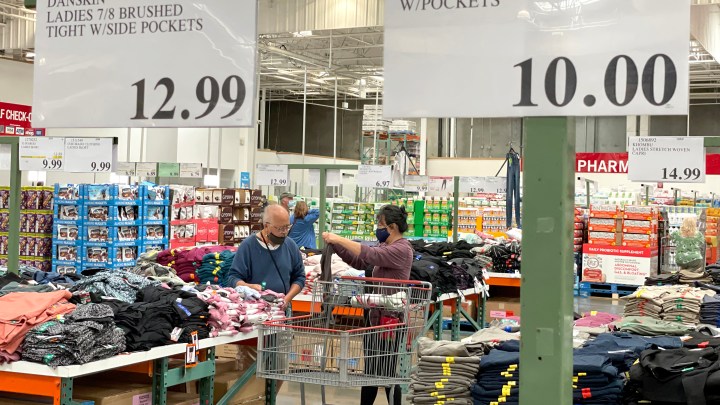 Shoppers at a Costco in Novato, California. Yearly inflation was unchanged at 5.4%, but the month-to-month and core inflation measures suggest price gains are slowing down. Justin Sullivan via Getty Images

Shoppers at a Costco in Novato, California. Yearly inflation was unchanged at 5.4%, but the month-to-month and core inflation measures suggest price gains are slowing down. Justin Sullivan via Getty Images

The big economic news of the day — and it’ll probably get sliced and diced for the rest of the month — is inflation.

As you may have heard, the consumer price index rose 5.4% year over year in July, the same as in June. And the index is at a 13-year high.

But, month to month, prices rose less in July than they did in June. And core inflation, which strips out food and energy, also grew at a slower monthly pace. Prices for used cars and airline tickets — which increased crazy fast in May and June — barely budged in July.

Now, Federal Reserve Chair Jay Powell has been saying all along that the rapid rise in prices we’ve seen this year is mostly “transitory,” meaning it’s been driven by supply chain bottlenecks as businesses get back to work.

With prices moderating for many items related to reopening the pandemic economy, Fed officials, investors and consumers can breathe “a sigh of relief — that the burst of higher prices and the surge in inflation that we’ve seen over the previous few months now seems to be fading,” said Andrew Hunter at Capital Economics.

But what about inflation for “food away from home”? That’s going out to eat. Prices kept rising sharply in July, along with wages for waiters, cooks and bartenders.

“Those wage increases just aren’t going to turn into a level of aggregate demand that will result in inflation,” said Joseph Brusuelas at RSM, an audit, tax and consulting firm focused on small and mid-sized businesses.

Even if they are getting big pay hikes, these lower-income service workers aren’t rich enough, and don’t spend enough, to raise prices economywide, Brusuelas said.

Some wage inflation for workers is fine, according to Josh Bivens at the Economic Policy Institute.

“People are going out to restaurants again, and wages and employment are both rising. And until we see evidence that the fast wage growth is like choking off employment growth, I think we just have to say, ‘That’s really good. Restaurant workers actually have some bargaining power they traditionally do not have,’” Bivens said.

But in housing, there is growing inflation risk, said Eric Freedman at U.S. Bank.

“We do think that rent increases will likely be the path forward,” Freedman said.

Correction (Aug. 13, 2021): The original version of this story misstated the name of the firm at which Joseph Brusuelas is chief economist. It is RSM.