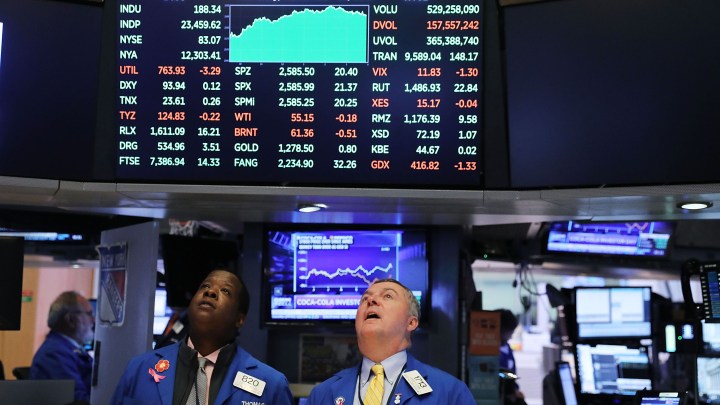 Inflation is currently running higher than it has in a decade — the consumer price index rose 5.4% year-over-year in June, the Commerce Department reported. It last peaked over 5% in 2008.

And every new sign of inflation staying at this level or potentially spiking higher sends jitters through financial markets, even though the Federal Reserve is signaling that the inflation we’re seeing now is very likely transitory, largely related to supply-chain and labor disruptions caused by the pandemic. Plus, the Fed’s said that long-term inflation will likely settle back to its target of 2% annually.

People certainly are paying attention to inflation right now. That’s what consumer surveys say, and what this reporter heard while interviewing passersby at Pioneer Courthouse Square in downtown Portland, Oregon.

“With the inflation prices that are occurring right now, it’s kind of difficult to see myself being able to purchase a home,” said Kendall Gordon, 29, who works in mortgage finance in Washington, D.C.

“Being a child of the ‘70s and ‘80s, certainly inflation was talked about. It is something that we need to be concerned about, in terms of income inequality and people being able to afford basic necessities,” said Michael Freud, 50, a supply-chain manager in Portland.

And it was bad here in the U.S. in the 1970s and early 1980s, said Navy Federal Credit Union corporate economist Robert Frick.

“Those were dark times, and there was a lot of desperation there. Inflation was really high and wages couldn’t possibly keep up,” he said.

But Frick said those economic conditions are nothing like today’s. “Inflation is higher, people are paying more for certain things — so if you have to buy a car or a house. But there’s not general, across-the-board inflation. I don’t expect that to happen.”

Because we’re not anywhere close to “full employment,” he said, and wages and prices aren’t spiraling upward and out of control.

In fact, Frick would welcome somewhat higher inflation than the Fed’s current target of 2% per year.

“If we got to a point where wages were pushing up inflation — even moderately — that’s a good thing. That means finally the economy is running on all cylinders, and we have a lot of people in the workforce making money.” That’s going to expand gross domestic product, he said.

It might seem like wages never keep up with rising prices for things like food and rent and gasoline. But that’s largely incorrect, said University of Michigan economist Betsey Stevenson, who served as chief economist at the Department of Labor during the Barack Obama administration.

“People think that inflation erodes their purchasing power,” Stevenson said. “On average, it doesn’t because on average it raises wages as much as it raises costs.”

“Both my wife and I have recently landed very good jobs, so we’re not concerned — except for we’ll be paying out of pocket for two college students next year, so we’ve got our challenges,” he said.

And Gordon’s seen her salary more than double in the past five years. So she said she’ll be fine “as long as corporate America keeps up and cost of living is evaluated in salaries.”

She is worried about friends her age who aren’t getting big raises and have student loans and car loans to pay off.

But some more inflation could actually be good for those folks too, Stevenson said.

“Borrowers tend to be younger people in a lot of debt get helped by inflation. If inflation goes up — higher than what people were expecting — well then, what you end up paying back to the bank is actually less, in terms of purchasing power,” she said.

“Seniors and older Americans are much more in touch with what’s going on on the price front,” Leer said. “Anyone who’s on a fixed income cares a lot more about inflation than people, let’s say, who are working and expect some increase in their salary as prices increase.”

The scary thing about inflation, according to these economists, is if everybody starts expecting it to stay significantly higher than 2%, the Fed’s target. That could become a self-fulfilling prophecy, which could sow economic confusion and disruption for years to come.