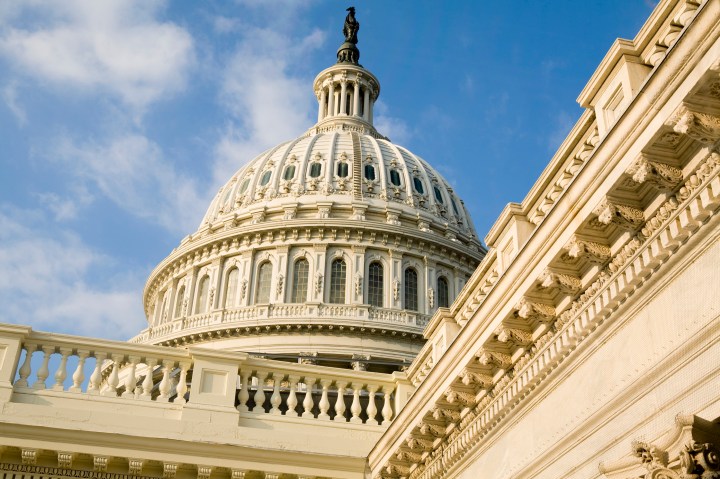 A view of the U.S. Capitol in Washington, D.C. Brendan Hoffman/Getty Images

First, a quick refresher: Reconciliation is a tool used in the Senate to fast-track spending-related bills and make them filibuster-proof before sending them to the president.

The Biden administration’s $1.2 trillion bipartisan infrastructure plan failed to move through the Senate on Wednesday, with all Republicans voting against it.

The Senate may vote again on it Monday, but if it fails, the Democratic party may couple physical infrastructure plans with its own $3.5 trillion reconciliation bill that will include expansive investments in community college, paid leave and health care subsidies.

To pass a bill in the Senate, you need a simple majority like you do in the House of Representatives. But what makes things more complicated in the upper chamber is that at least 60 senators have to agree to end debate over the bill so that they can get to that vote in the first place.

“If you don’t have the 60 votes, then members can filibuster and just offer lots of amendments, protract the debate, do anything, really, to stall and make it so you can’t move forward,” Kelly Whitener, a Georgetown University associate professor, told Marketplace.

But budget reconciliation allows senators to avoid that roadblock by bringing a bill to a vote with a simple majority, or just 51 lawmakers, in specific cases, explained Marketplace reporter Marielle Segarra.

The bill has to involve changes to spending, revenues and the federal debt limit, and can also address mandatory spending across programs such as Medicare, Medicaid, federal civilian and military retirement, SNAP food benefits and farm programs, according to the Center on Budget and Policy Priorities.

The budget reconciliation process originated about five decades ago. From after World War II up until the early ’70s, the United States had what was commonly considered consensus budgeting, according to Craig Volden, a professor of public policy and politics at the University of Virginia.

“The president, the appropriations committee, folks in Congress and so on had pretty much a common view about what they wanted to do with the budget,” Volden explained.

Volden noted that they thought spending should be addressed to the greatest public needs, taxes shouldn’t get the public too upset, and that the budget should be balanced in the long term.

“That kind of held through the late 1960s and into the early ’70s. But then it started breaking down in the 1970s for a variety of reasons,” he said.

Volden said that the economic growth the U.S. had experienced after World War II was slowing down, and entitlement spending was rising for programs set up in the 1960s, such as Medicare and Medicaid.

President Richard Nixon also impounded funds while he was in office, making budget choices himself rather than Congress deciding, Volden explained.

He added that there was also squabbling among appropriations subcommittees over who should have a greater area of spending, while the number of amendments on the floor of the House and the Senate were rising.

“Which means that they weren’t able to solidify that consensus at the committee process, and it spilled out onto the floor. And then the parties started trying to outbid one another on popular programs,” Volden said.

These factors all culminated in the adoption of the Congressional Budget and Impoundment Control Act of 1974.

“The logic of the filibuster restriction was much clearer when reconciliation was supposed to be on the second resolution,” said Joseph White, a professor of public policy at Case Western Reserve University. “It had to be fast-tracked.”

In a panel about the Senate filibuster rule, former Senate parliamentarian Robert Dove said he was part of the 1974 group that wrote the Budget Act, and that they discussed reconciliation “maybe for 10 minutes, because it seemed almost like a ministerial function.”

“The name ‘reconciliation’ comes from the fact that what it was supposed to do was reconcile the difference between the appropriation bills which had been passed in the summer and the second budget resolution which doesn’t even exist anymore,” Dove said.

There have been changes to the process over the years, with Congress allowing reconciliation to begin at the beginning of the budget process. The Senate also adopted the Byrd Rule in 1990, which doesn’t allow the reconciliation process to be used for changes to programs like Social Security, among other restrictions.

Volden said he’s been fascinated by the evolution of reconciliation over time, with it being used to address balanced budgets through the ’80s and ’90s.

But later on, it was used to pass the Bush tax cuts in the early aughts, push through Obamacare in 2010 and pass the Trump tax cuts in 2017.

“Post-2000, I think it is working well for politicians to achieve their goals,” he added. “But not for balancing the budget.”