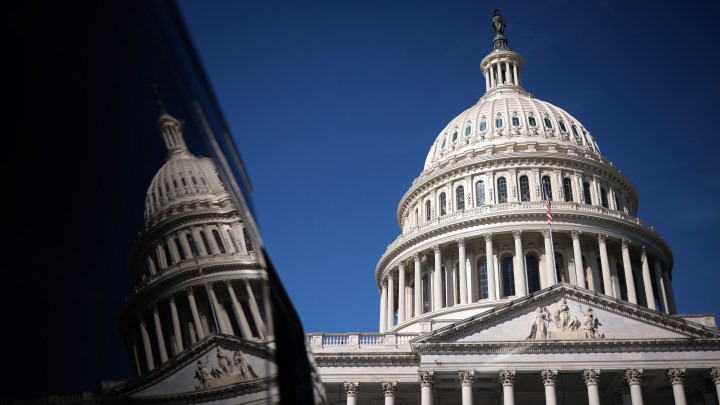 COPY
Roosevelt Forward CEO Felicia Wong says President Biden and congressional Democrats may be able to implement their economic priorities through laws they already passed, such as the Infrastructure Investment and Jobs Act and the CHIPS and Science Act. Win McNamee via Getty Images

Roosevelt Forward CEO Felicia Wong says President Biden and congressional Democrats may be able to implement their economic priorities through laws they already passed, such as the Infrastructure Investment and Jobs Act and the CHIPS and Science Act. Win McNamee via Getty Images
Listen Now

On Friday, Congress passed its bipartisan infrastructure bill. The legislation included funding for classic city infrastructure like roads, bridges and transit and other projects such as nationwide broadband internet and power and water systems. Progressives in Congress are now focused on the Build Back Better Act, legislation that contains President Joe Biden’s plan to expand the social safety net in the U.S.

But right now, the Congressional Budget Office may slow down those plans.

“Marketplace” host Kai Ryssdal spoke to Zach Moller about CBO scoring and its role in the legislative process. Moller is a federal budget policy expert and director of the economic program at Third Way, a center-left think tank in Washington.

The CBO is a nonpartisan federal agency that estimates the economic impact of legislation and provides fiscal analysis of Congress’ proposals. Moller said the office is essentially in charge of figuring out what a policy would cost or how much money a policy can save.

“That means if a bill is 2,000 pages long, they’re going into each section of the bill and figuring out what that particular section is going to cost or what it’s going to save,” Moller said.

The work of the CBO is incredibly detailed. Several times a year, the CBO creates a budget baseline to judge future legislation. The baseline, a 10-year economic forecast, is predicated on how the economy is working at that time, and it includes factors like the tax code, inflation and interest rates. From this baseline, the agency develops scores to estimate a bill’s impact.

“It requires a substantial amount of technical expertise to do what they do,” Moller said. “It requires a lot of time and effort to get the numbers right.”

For the Build Back Better Act, the CBO score is extremely important. Senate Democrats are contemplating passing the bill through the budget reconciliation process, a procedure that enables Congress to pass certain fiscal and budgetary legislation with a simple majority. But this method comes with additional regulations, Moller said.

The “CBO score is vital because the Senate parliamentarian is going to have to weigh in on whether or not individual parts of the bill meet the requirements of this special process that they are using,” Moller said.

The CBO must share its score with the Senate before the bill can be passed. To make matters more complicated, moderate Democrats may not be happy with the price of Biden’s Build Back Better legislation, currently tagged at about $1.75 trillion.

A group of moderate Democrats in the House released a statement committing them to vote for the bill. However, they must receive a CBO score by the week of Nov. 15, they said. But House Budget Chairman John Yarmuth told CNN that a CBO score could take up to two weeks to produce. Some say it might not be ready before Thanksgiving.

“I think that’s a really essential part of why CBO takes so long,” he said. “Because they’re doing a more detailed look at what’s going on in this legislation than anyone else.”

House Speaker Nancy Pelosi has said the plan is still to pass the bill during the week of Nov. 15, when the House returns from recess. But without the CBO score, it might take longer than expected.