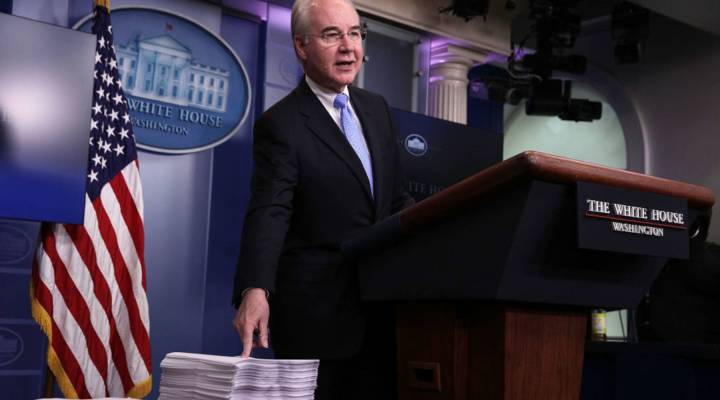 Republicans have unveiled their long-awaited bill to repeal and replace the Affordable Care Act, or Obamacare. The GOP plan keeps many of the stipulations in place and changes others. But the real questions on peoples’ mind are “How much will it cost?” and “How many people will it cover?”

Figuring out that scorecard out will fall to the Congressional Budget Office. That CBO score will be the first indicator of whether or not Republicans can hold to their promise of not cutting insurance coverage for millions of Americans. In a nutshell, a CBO score assigns a dollar value to proposed legislation. “Bill X” will either add to the deficit or it will subtract.

“It’s simple in concept and complicated in practice,” said Roberton Williams, a senior fellow at the Urban Brookings Tax Policy Center. “The basic idea is to mimic people’s behavior.”

He said the CBO’s score not only tries to approximate the cost of new legislation, it also tries to predict behavioral changes.

“All these different pieces fit together based on what the projected behavior of all the actors is, and that’s really hard to do,” Williams said.

Hard to do because for one, the CBO can’t predict the future; there could be a war or some outside shock to the economy.

“If you have an economic boom or an economic collapse, you get a very different answer in real practice,” Williams said.

The CBO runs two basic scoring methodologies. Under “static scoring,” the size of the economy remains fixed. But Bob Bixby of the Concord Coalition said another type of scoring does factor in larger economic impacts.

“Dynamic scoring says there are certain pieces of legislation that are so consequential, it would be foolish to ignore the fact that it has an effect on the overall economy,” he said.

For example, the CBO could use the dynamic model to predict whether legislation might create new revenue. But, in terms of the new GOP health care plan, Bill Hoagland of the Bipartisan Policy Center said they will also be looking at more than just costs.

“How many people will be covered? What will be the average premiums? And things of that nature,” Hoagland said. “So, it’s not just the cost, but it’s also an analysis of the legislation.”

And all this matters, Hoagland said, because average Americans need to know that when their elected official voted on a piece of legislation, they had the best available information at the time.