COPY
The Biden administration is offering free coverage until New Year's to people who have received jobless benefits in 2021. Joe Raedle/Getty Images

The Biden administration is offering free coverage until New Year's to people who have received jobless benefits in 2021. Joe Raedle/Getty Images
Listen Now

The nonpartisan Congressional Budget Office (CBO) has released its calculation of the costs and benefits if Congress repeals the federal health care law, but doesn’t replace it. About 32 million people would be uninsured by 2026 and premiums would double. On the other hand, the federal deficit would drop by $473 billion.

Marketplace’s Dan Gorenstein joined us to talk about the possibility of another repeal-and-replace plan in the cards and the future of Medicaid. Below is an edited transcript.

David Brancaccio: What are we hearing from the GOP after this CBO score?

Dan Gorenstein: Well, honestly — even before this pretty brutal score came out — there was lots of talk about how repeal now and how replace later was going nowhere. So while it’s virtually impossible to say anything with certainty about this bill, David, I think it is safe to say the score from the CBO pretty much guaranteed “repeal first and trust us, we’ll come up with something great” is actually dead. Like, dead, dead.

David Brancaccio: So that’s repeal, only. Not replace for now. But we see that Bloomberg News is reporting today that a new CBO score is expected perhaps later today on a repeal-and-replace plan that’s still somehow out there?

Gorenstein: Yeah, while earlier in the week there were plenty of obituaries being written about the Senate bill, it is still alive — you can call it a zombie bill or a Lazarus bill depending on your perspective. That new CBO score will give everybody a slightly better sense of the number of people who lose coverage, what happens to premiums and how much money [Senate Majority Leader Mitch] McConnell has to play with. Last night, I was talking to a source who told me that one idea being discussed is to give states that expanded Medicaid under Obamacare $200 billion to help ease the pain of ending this expansion and making deeper cuts to the program. Now that may sound like a lot of money, but the Center on Budget and Policy Priorities did the math, and when you add it all up between reductions to Medicaid and less generous subsidies — that’s a $1.2 trillion hit to low- and moderate-income Americans. Getting the $200 billion would mean signing onto a plan that cuts benefits by a trillion dollars. 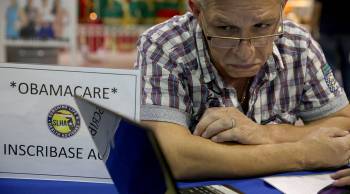