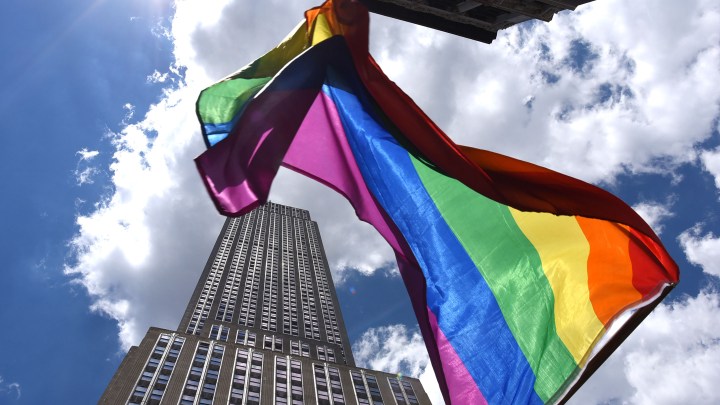 During Pride Month, the iconic rainbow flag flies across cities and businesses as a symbol of the LGBTQ community. But for companies taking part in Pride, simply attaching a rainbow to their brands is not enough when it comes to supporting social justice, says Andrew Isen, founder and president of the LGBTQ marketing and communications agency WinMark Concepts.

“What many companies fail to understand is that this concept, this annual ritual known as ‘rainbow washing,’ which is essentially wrapping yourself in a rainbow, can have unintended negative consequences,” Isen told “Marketplace Morning Report” host David Brancaccio.

In other words, surface-level gestures of solidarity are not the same as tangible actions to lift up the LGBTQ community. And consumers can spot superficial support. Isen spoke with Brancaccio about what businesses truly invested in the cause can do, and the following is an edited transcript of their conversation.

Andrew Isen: Well, let me put it in context. You’re walking through a city, you’re walking around any city in America, and you walk around a bank, and it’s festooned in rainbow flags. Storefronts festooned in rainbow flags in the month of June. And then they disappear. And what many companies fail to understand is that this concept, this annual ritual known as rainbow washing, which is essentially wrapping yourself in a rainbow, can have unintended negative consequences.

Brancaccio: So paying lip service during Pride Month does not equal a commitment to the issue?

Isen: Absolutely not. Pride really is 24/7, 365. And companies that understand this and relegate themselves to a yearlong commitment rather than a one-month effort to reach out to the community, understand how to reach this consumer. Companies that rainbow wash are seen as pandering and tokenistic to this community.

Brancaccio: So I’m hearing two things from you, Andrew: It bugs you when you see this, you think it’s hypocritical, wrong. But you’re also saying this is bad business.

Isen: It is bad business. So for instance, our client Corona beer has eschewed marketing during June and has committed itself to an 11-month commitment with LGBTQ marketing, graphics, messaging, etc., and in turn has seen a 20% growth in its sales.

Brancaccio: So how can other companies do better on this? I mean, it has to do with, not strategizing in some boardroom inner sanctum, but probably opening up lines of communication, maybe?

Isen: Well, there’s a couple of things, David. First of all, as companies embrace DEI, diversity, equity and inclusion, they think that they’re touching on and reaching the needs of this community. But in fact, they’re not. It’s very much a display of, “Yes, we want your business.” But companies that are actively seeking this consumer segment for the other 11 months of the year, are really benefiting.

So, for instance, you’ve got $1 trillion worth of a spending engine. It’s the highest discretionary household income, about 23% above the national average. These consumers know better, they understand what’s sincere and what’s authentic. When brands make emotional connections to these consumers, it’s a win for the consumer and it’s a win for the brand’s bottom line. But when I say emotional connection, emotional connections are predicated on action. That is, through a company putting their money where their mouth is, showing that we have active programs, active outreach, not just saying, as a corporation, we’re supportive of you as an LGBTQ person, but as an LGBTQ consumer.