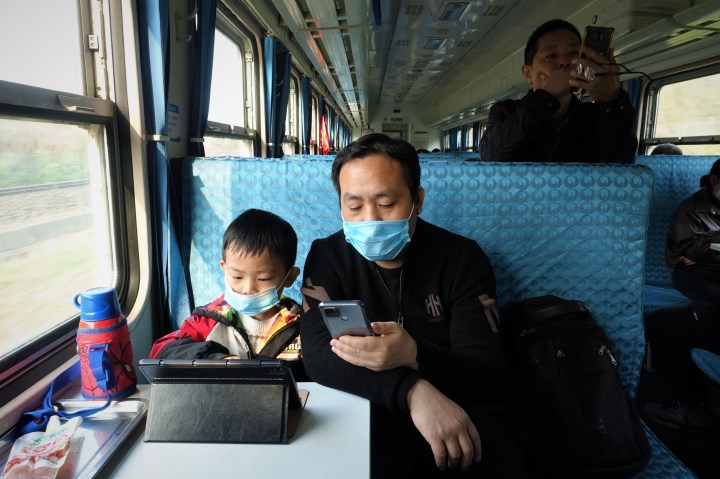 COPY
A father with his son on a low-cost train heading into the Chinese countryside. People in rural China cite the cost of raising a child as a main reason they don't want to have more children. Charles Zhang/Marketplace

A father with his son on a low-cost train heading into the Chinese countryside. People in rural China cite the cost of raising a child as a main reason they don't want to have more children. Charles Zhang/Marketplace
Listen Now

China’s new three-child policy has baffled demographers, and some Chinese citizens have ridiculed the move.

At the end of May, China’s government announced that couples will soon be able to have up to three children, up from the current maximum of two. The news comes after China’s recent census showed that the number of births was on the decline for a fourth consecutive year, with only 12 million births in 2020. That’s not enough to replace the current population, and officials there worry that there will not be enough taxpayers to sustain pensions for the retired and elderly.

Sociologists based in the U.S. have called the three-child policy “timid,” “unimaginative” and “largely irrelevant.” The discussion online in China is more reserved, but a number of women have turned to humor to get their point across.

“Darling, we only have one child so far, let’s have a second!” the husband said in a comedic video.

There are also huge costs immediately before and after birth in China, according to baby products seller Liu Nan.

The online discussion revolving around the cost of child-rearing masks tougher structural barriers to growing a family, such as the lack of medical care and education resources, according to financial commentator Ye Tan.

“In Shanghai, there are not enough elementary schools and not enough teachers in China,” Ye said in a WeChat broadcast. “The number of nurses per capita [in China] is low compared to the rest of the world.”

Chinese officials say they are addressing the population problem in a holistic way and have so far focused on reducing student stress by making exams easier and reining in the extracurricular education sector.

Some mothers also cite child care as reasons to not have more children. Caregiving in China falls mainly on the family. It is often a thankless job, as jokingly illustrated in Mama Niu’s WeChat video.

It begins with Mama Niu asking her second child, a daughter, if she wants a baby brother.

“Now you provide for four grandparents and you want three children?” her daughter said in a matter-of-fact way. “You’ll be looking after nine grandchildren before you are eligible for your pension! You’ll be working like a donkey. When you are old and sick, my elder brother will ask if we should stop your medical treatment. Then the younger brother might say, ‘Yes, but do it after we ask mom for her banking passwords.’ What do you think Mama?”

The video jumps to a shot of the mom sitting with her shoulders in a comical slump.

Other moms resent the government’s intrusion on their bodies, which stretches back to the late 1970s, when China had a one-child policy and enforced it unevenly nationwide. In some places, women were fined, forced to have abortions and faced additional consequences.

“My mom had a second child because she badly wanted a son,” a model from Qingdao city said on Douyin, a Chinese version of TikTok. “As a civil servant, she is not allowed to exceed the birth limit of one [at the time]. So, she lost her job.”

Today, women complain that they are still being penalized at the workplace for being moms. A model from Qingdao said she will not be following her mom’s footsteps to have more children.

“When I look at my husband’s beer belly, which has no stretch marks, I wish I had a belly like that and he had a womb,” she said in a Douyin video.

A lot of mothers wish they could pass on childbearing duties to their husbands. As in many countries, child care in China still falls disproportionately on women.

“The government wants us to have three children. Hospitals advocate for natural labor and breast feeding. Experts say children shouldn’t be raised by their grandparents. Children want to be accompanied by their moms all the time. Husbands want their wives to be beautiful and able to earn lots of money,” WeChat Channels user Guangdong Mama Heng said, repeating a common saying that is often repeated online: “What am I, Superwoman?”

Pressure on women is so enormous that the last revision to the birth policy in 2016, from one child per couple to two, did not provide a long lasting “baby bump” effect.

“My desire to survive is low, let alone reproduce,” a woman said to her husband in another WeChat Channels clip. “Do you know what the only thing we can do for our unborn child is? It’s to not have one.”

The video ends in canned laughter.

As married couples in China are not having enough children to replace the population, it makes some in the country wonder why there are birth restrictions at all.

There is no word yet on when the new three-child policy will come into effect.