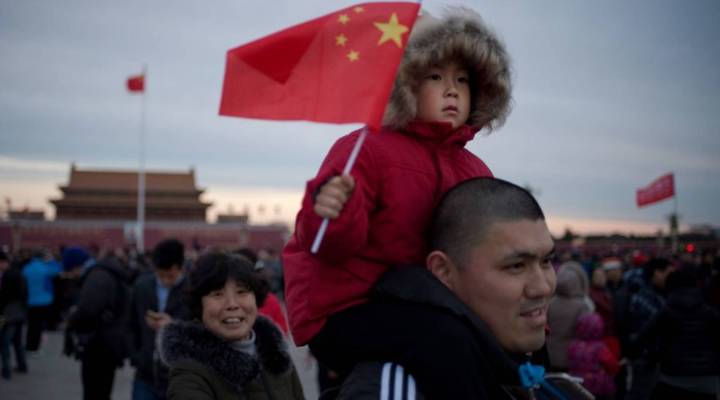 COPY
This file picture taken on March 5, 2017 shows a child holding a national flag as he sits on the shoulders of a man after the flag raising ceremony on Tiananmen Square, before the opening of the National People's Congress in Beijing. China appears poised to scrap its two-child policy, with a state-run newspaper on Aug. 27 citing a draft civil code that would overhaul decades of controversial family planning rules.  NICOLAS ASFOURI/AFP/Getty Images

This file picture taken on March 5, 2017 shows a child holding a national flag as he sits on the shoulders of a man after the flag raising ceremony on Tiananmen Square, before the opening of the National People's Congress in Beijing. China appears poised to scrap its two-child policy, with a state-run newspaper on Aug. 27 citing a draft civil code that would overhaul decades of controversial family planning rules.  NICOLAS ASFOURI/AFP/Getty Images
Listen Now

China’s government has long restricted the number of children a married couple can have, but change could be on the way. All references to family planning have been removed from a widespread civil code that moderates everything from contracts to marriages. Some Chinese media said this is the clearest sign yet that the government will let families have as many kids as they want.

David Brancaccio spoke to Marketplace’s correspondent in China, Jennifer Pak, about this. Below is an edited transcript of their conversation.

Well, it started in 1979, and the policy was one child per family. But there have been some flexibility over the years, so rural farmers, ethnic minorities, couples where one partner is an only child … they can have more than one baby. But [for] those who broke the rule, enforcement was uneven. Some women were brutally forced to have abortions. Others just paid the fine. And then in 2015, the government raised the limit from one child per couple to two.

What economic pressures are driving this change?

Basically there are not enough workers in China. Government figures show that the workforce is shrinking at an annual rate of at least 4 million. Plus, there’s a huge gender imbalance – 30 million more men than women, because of cultural preferences for boys. And what does that mean for businesses? Textile factories and production requiring fine detailed work [that] traditionally prefer women are having trouble recruiting, and many of the companies we’ve spoken to are far more worried about finding a stable and affordable workforce than a possible trade war with the U.S.

What are some projections about whether getting rid of birth limits would work?

Some critics say it’s just too little, too late. When the government changed the policy last time from one child to two, the baby boom officials expected just didn’t happen. Turns out, couples were pretty stressed about the cost of raising a child. Housing is so expensive that usually parents and grandparents have to pitch in to help with the down payment.

So this draft civil code no longer has a reference to family planning. Does that mean Chinese families are now free to procreate? That the limits are done?

Not exactly. What’s interesting is that nothing has been officially announced. The decision-making process in China’s government is just so opaque that now we’re relying on what’s not included in a draft civil code to give indication of where the policy will go. What we do know is the government wants to raise the birth limit – that could mean lifting limits on births, financial incentives. Two Chinese academics even suggested penalties, forcing couples with fewer than two children to pay into a reproduction fund. Now, as you can imagine, that has provoked public anger and has been ridiculed because a lot of these suggestions still put the state firmly in the bedrooms of Chinese families.