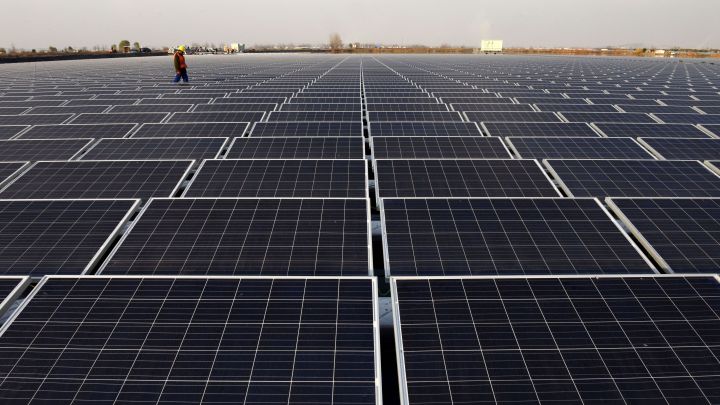 COPY
Targeted subsidies for specific industries have long been part of China's strategic development. Solar energy is just one of the areas where this strategy has been used. AFP via Getty Images

Targeted subsidies for specific industries have long been part of China's strategic development. Solar energy is just one of the areas where this strategy has been used. AFP via Getty Images
Listen Now

The Chinese government does a lot for its favored companies.

“Free land, loans that never have to be repaid for the life of the loan, manufacturing facilities that are unhooked from the electrical grid, subsidized raw materials, access to markets,” said Usha Haley, chair of international business at Wichita State University.

Haley said these kinds of subsidies for targeted industries have long been part of China’s strategic development.

“Chinese strategy in a nutshell is identify some sectors where they figure they can be competitive in the next five to 10 years, throw a lot of money at it,” she said. Favored firms absorb the technology they can by buying competitors or through intellectual property theft.

Haley said her conservative estimate is that the government was subsidizing more than 30% of the output in industries including autoparts, paper, glass, solar and food production (she said the U.S. solar manufacturing industry is all but gone now, which she partly attributes to Chinese subsidies).

Haley said China adds subsidized steel plants in excess of what it needs, depressing prices globally. In 2017, China’s excess capacity in steel was 65% higher than the U.S.’s total steel production.

Faced with that, politicians and industry leaders here in the United States are increasingly asking: Why doesn’t the U.S. do the same? The term for that — strategic support for domestic industries — is industrial policy.

“The phrase ‘industrial policy’ has just been anathema in the halls of Washington for a long time,” said David Autor, professor of economics at the Massachusetts Institute of Technology.

He said many countries carefully plan out how to support critical industries. The U.S. rarely does so.

“The thrall of the idea that the market will sort it out and the government can only do harm by getting involved prevents thoughtful discussion or planning around these topics,” Autor said.

That is changing. Partisan divides on the issue are beginning to evaporate as China’s rise has stoked a sense of urgency.

“It’s something we need to do now,” said Matthew Goodman, senior vice president at the Center for Strategic and International Studies.

It is unlikely to take the same form as China’s style of subsidy, he said.

“The Chinese typically identify state champions, national champions they then heavily subsidize and create a favored market space for and in some cases facilitate theft of international property,” he said.

The U.S., by contrast, is more likely to use the government’s role in “investing in basic research and development and through its role as a purchaser of equipment and services and technologies to create markets where there might not otherwise be a market,” Goodman said.

In practice, that can take many forms. One example is the COVID-19 vaccines.

“It’s questionable whether Pfizer would have been able to develop this vaccine without the advance purchase agreement that the U.S. government made, nor would it have been possible without basic research funded by the government into molecular biology and chemistry” Goodman said.

History provides other examples where the U.S. has thrown its support behind industrial development.

Tax credits have supported markets for electric vehicles and paved the way for Tesla’s rise. They’ve also propped up the solar installation industry.

After the Soviets launched the Sputnik satellite, the U.S. ramped up research and development to levels not seen since. Between 1958 and 1963, the government bought the entire country’s supply of integrated circuits, providing a market for a cutting-edge technology.

Steven Vogel, who chairs the political economy program at the University of California, Berkeley, said Silicon Valley provides another instance.

“A lot of what we think of as Silicon Valley venture capital, originally some of the funding came from the U.S. government. And we’ve had massive research and development programs in military technology obviously,” he said.

“In 1990, we accounted for 37% of global semiconductor production. Now we account for 12%,” said John Neuffer, president of the Semiconductor Industry Association. “Central governments all around the world give massive incentives to build semiconductor fabrication facilities, or fabs. The U.S. government does not do that.”

More generally, there’s legislation being considered that would pump $100 billion into the National Science Foundation to develop new technologies of various kinds. Senators on both sides of the aisle want federal health care systems to buy only pharmaceuticals that were produced entirely in the United States.

“We can make mistakes and the process becomes politicized very quickly,” warned Thomas Duesterberg, a senior fellow at the Hudson Institute. He said if the U.S. goes too far, it risks alienating allies it needs.

“We are likely to set off a competition with Europe and possibly other advanced nations on industrial policies,” Duesterberg said. It also “totally undermines the case for putting stronger disciplines into the World Trade Organization to fight back against China.”

Ann E. Harrison, dean of UC Berkeley’s Haas School of Business, believes industrial policy done correctly can be useful, but takes a broader view of how the U.S. can promote its competitiveness.

“We need more people to go get better educations, and we need to improve our infrastructure,” she said.

Still, Duesterberg agrees the U.S. should not sit idle on the question of its competitiveness and wealth. The U.S. may be one of the most advanced economies now, but history is littered with countries whose fortunes have changed.