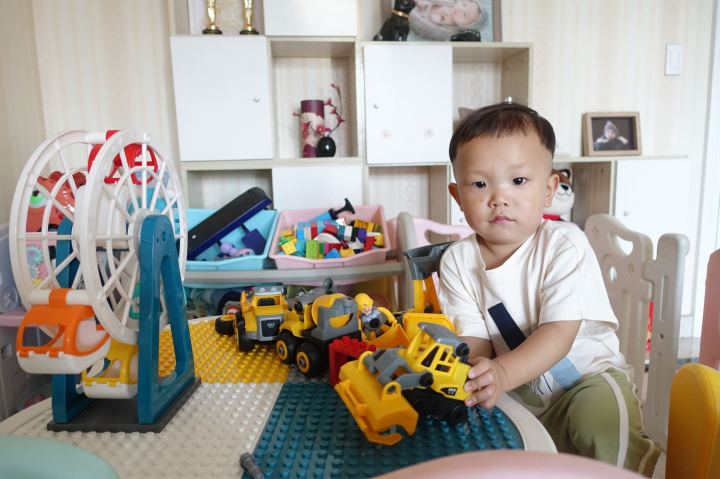 COPY
Fang Zixian and his abundance of toys — the first generation in his family to have such items. Charles Zhang/Marketplace

Fang Zixian and his abundance of toys — the first generation in his family to have such items. Charles Zhang/Marketplace
Listen Now

In late October 2015, China’s government announced it would end a controversial one-child policy and allowed married couples to have up to two children because of a shrinking workforce.

There was a brief baby bump after the announcement but then the number of births began declining again since 2017 to 14.7 million last year.

“Almost five years since [one-child] policy ended, we have not seen the baby boom,” said Wang Feng, a sociology professor at the University of California, Irvine and Shanghai’s Fudan University.

The high cost of raising children and housing prices are often cited as one of the key deterrents to young parents from having one more child.

Marketplace spoke to factory owner Fang Yuan and his wife Zhuang Mengyi, a video producer, on the cost of raising their 2-year-old son, Zixian, in the cheaper Chinese countryside in eastern Zhejiang province.

Potential costs for Zixian as an eligible bachelor

Traditionally, men are eligible for marriage in China if they:

Zixian’s parents are divided whether they will help their child on this front. Zixian’s mom, Zhuang, hopes he will be independent after 18 years of age like Americans are, but his father, Fang, is more traditional.

“Parents have an obligation to help their children as much as they can. The wealth gap is big these days, so parents’ help is important,” Fang said.

Neither he and his wife are keen to have a second child anytime soon.

“As young people in China, we have a lot of pressure to take care of our elders and children, while paying off our mortgage. I know so many people who don’t even want to give birth to one child,” wife Zhuang, said.

She also felt that the two-child policy brings up some bitter feelings among families since government officials previously enforced the one-child policy through big fines, mandatory intrauterine devices for new mothers and sometimes forced abortions.

The consequences of China’s continued birth control will be felt for generations to come.

Already, China’s official working age population of 16 to 59 shrank by 44 million between 2011 to 2019 to 896 million. That is the equivalent of the population in Canada, plus New Zealand, disappearing from the jobs market.

If this trend continues that might mean not enough young taxpayers will fund pensions for the aging population.

“If you compare China, with [its] neighbors, in terms of the per capita income … China is already getting old before it is rich,” sociology professor Wang said.