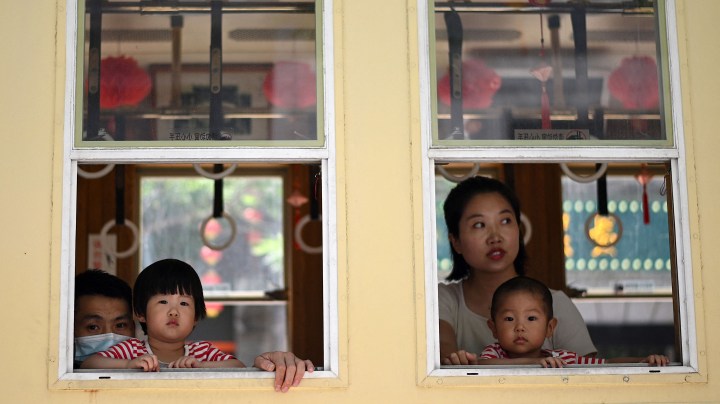 COPY
One reason? "The work of raising a child, like in many countries, falls disproportionately on women, and women in China have complained of being penalized at workplaces for being a mother," says Marketplace China correspondent Jennifer Pak. Noel Celis/AFP via Getty Images

One reason? "The work of raising a child, like in many countries, falls disproportionately on women, and women in China have complained of being penalized at workplaces for being a mother," says Marketplace China correspondent Jennifer Pak. Noel Celis/AFP via Getty Images
Listen Now

Reaction to the Chinese government’s decision to allow couples to go from having just two children to having a third has been lukewarm at best. The policy change is meant to address the two trends of a shrinking workforce and an ever-expanding retired population.

Marketplace’s China correspondent Jennifer Pak has more. The following is an edited transcript of her conversation with “Marketplace Morning Report” host Sabri Ben-Achour.

Sabri Ben-Achour: Why has the reception to this change in policy been lukewarm?

Jennifer Pak: Well, largely it’s about property, property, property. You know, to get your child into a decent school, or if you have a son who wants to get married in China, you need property, and housing these days requires the bank of mom and dad, and grandma and grandpa. It’s expensive.

Secondly, the work of raising a child, like in many countries, falls disproportionately on women, and women in China have complained of being penalized at workplaces for being a mother.

Ben-Achour: The government has tried to encourage people to have more children before, back when it expanded the one-child policy to a two-child policy five years ago. That didn’t particularly work. Is the government trying something different now?

Pak: Well, the government says is trying to approach this more holistically, like, say, reducing the cost of weddings and easing the relentless competition in education, like restricting online classes for preschoolers. And today, China fined a lot of training centers millions of dollars for cheating anxious parents.

Ben-Achour: And still, though, I mean a lot of families, just don’t want to have more children.

Pak: Well no, because, in China, this is still a country of 1.4 billion people. There are limited resources, there’s a lot of competition for everything.

And then of course there are emotional scars. You know, it wasn’t that long ago that women were heavily fined or forced to get abortions for exceeding the birth limit. So a poll from the state run news agency Xinhua asked readers if they are ready for the three-child policy. And, you know what? A majority of respondents said they would never consider it. That poll was later removed.