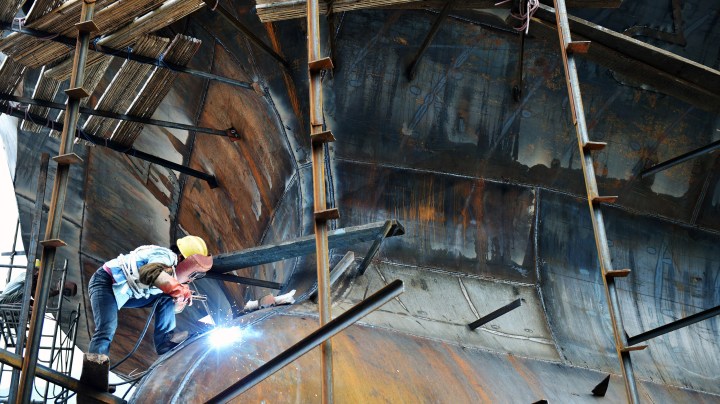 Prime Minister Boris Johnson says he wants Britain to become a shipbuilding superpower, again. At his last annual party conference, conducted in cyberspace due to the pandemic, Johnson heralded a renaissance in a British industry that, in the 1890s, controlled more than 80% of the global ship manufacturing market but contracted sharply in the second half of the 20th century.

In his conference speech, the prime minister invoked a recent controversy over a patriotic song written in the 1700s: “Rule Britannia.” The anthem, with its rousing chorus of “Britannia rules the waves” has incurred the wrath of progressive Brits who regard it as an anthem of empire and oppression. Traditionalists though, including Johnson, see it as an exuberant celebration of the United Kingdom’s history of maritime supremacy.

“We aren’t embarrassed to sing old songs about how Britannia rules the waves,” he said. “In fact, we’re even making sense of it with a concerted national shipbuilding strategy that will bring jobs to every part of the U.K.”

Turning Britain back into a shipbuilding superpower is quite a tall order. While the country still builds its own warships, superyachts, specialist research and patrol vessels, no one believes it will ever compete with the huge commercial shipyards of China, Japan and South Korea.

“I don’t think we should be under any illusions that we’re going to be necessarily building massive container ships or tankers or cruise ships in the U.K. That’s not where we think we’re going to be,” said Ben Murray, chief executive of the industry body Maritime UK.

Murray believes that a large part of Britain’s maritime future lies in designing and building new systems to combat climate change. The International Maritime Organization has set the global shipping industry a target of cutting its carbon dioxide emissions by 50% by the year 2050, and the U.S. government would like to see them cut by 100%.

Murray described this as “an opportunity to create fantastic new products and solutions that help us decarbonize.“

One way of cutting a ship’s carbon emissions, currently under development by several British companies, resorts to one of the earliest forms of marine propulsion.

The sails that her company has designed are not the great billowing canvasses of old.

“They’re more like an aircraft wing,” she said. “They are vertical metallic sails. And smart. They know how to feather to get the best wind speed and direction. If there’s a bridge, they know they have to retract and come down on the deck. They’re fully automated, so the crew won’t need to be taught which rope to pull.”

Gilpin’s vertical sails, which assist the propulsion of the vessel, will cut fuel consumption by at least one-fifth, lowering costs and reducing carbon emissions. She thinks it will be a moneymaker.

“The transition of the global fleet, which is 60,000 ships, represents a really big commercial opportunity for people who can find solutions for decarbonizing it,” she said.

Edwin Pang, a naval architect and the founder of the maritime consulting firm Arcsilea, has embarked on a similar mission to decarbonize shipping. He’s part of a consortium developing a small car ferry driven by hydrogen-powered fuel cells to operate on a short route between two islands in the Orkney Islands off the northeastern coast of Scotland.

“We have to start small. The ferry is only about 40 meters, takes about 16 cars,” Pang said. “Once we get the demonstrator into the water and get a good understanding of how it works, then we can start considering scaling up.”

The consortium is international, so it is not clear how much work this will generate in the U.K. if it proves a success. But Pang pointed out that a British company, Johnson Matthey, is one of the largest producers of components for fuel cells, and U.K. companies will be developing processes for integrating fuel cells into ships.

How much any of this innovation — and Boris Johnson’s rhetoric — will translate into British manufacturing and jobs is anyone’s guess at this stage. But marine innovator Gilpin thinks the U.K. could dominate the green revolution in shipping. And so, perhaps, Britannia might rule the waves again, although not this time in a militaristic way.

“Yes, absolutely,” Gilpin said. “Climate leadership has to be the way forward, and I think the U.K. is really well placed to lead the world. “

Money could be a problem, however. The government has pledged to put $28 million into kick-starting the green shipping revolution. But Maritime UK says it needs $1.5 billion.