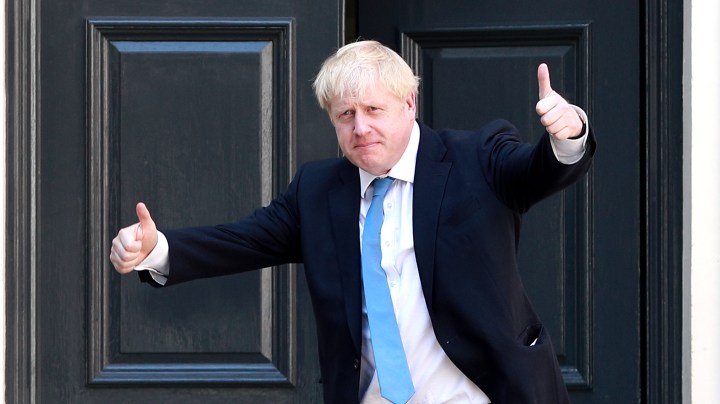 Boris Johnson, one of Britain’s most colorful — and controversial — politicians, will become U.K. prime minister Wednesday, after winning an election for the leadership of the ruling Conservative Party.

He won that election decisively with a commitment on Brexit: a promise to take Britain out of the European Union, with or without an exit deal, by the scheduled date of October 31st.

The pledge was popular with Conservative party members, but feelings about it are distinctly mixed in the country at large.

Marketplace has been gauging sentiment towards the new prime minister and his Brexit plans among small business owners in the U.K.’s manufacturing heartland, England’s Midlands.

“I feel very, very happy that Boris has won,” Steve Hardeman, boss of Clevedon Fasteners, a small engineering company in Sutton Coldfield, told us. Hardeman voted to leave the European Union because he wants to be free of what he calls “excessive” EU regulation.

“After three years of dithering by Theresa May, Boris will deliver Brexit. He has the chutzpah to do it. It will happen. It will be done,” Hardeman said.

Critics portray Johnson as chaotic, self-obsessed, irresponsible, and untrustworthy. But Hardeman believes the new PM is “a fighter” who will find a way through the Brexit mess and eventually secure a good free trade agreement with the bloc because, unlike outgoing Prime Minister Theresa May, Johnson is prepared to walk away from the negotiating table.

Hardeman might not be too badly affected by any new trade barriers between the U.K. and the EU. Although his company exports to 38 countries around the world, he does not sell a lot of his products in continental Europe.

Darren Price, on the other hand, exports only to the EU. And he’s alarmed by the rise of Boris Johnson.

“He’s been making far too many noises about accepting a no deal Brexit that would be damaging for my business and for lots of others,” said Price, who with his wife runs a small clothing company, British Boxers, near the city of Stoke-on-Trent.

“Up to now, exporting into continental Europe has been a simple process, with no tariffs and no complications over customs. We’re very concerned as a small business about the implications of that changing,” he said.

The new Prime Minister once dismissed the concerns of business about Brexit with an expletive, so Price doesn’t trust him.

“Someone who infamously said during the referendum debate ‘eff…business’ — I mean, that doesn’t give us, as a business, much confidence in him, really,” Price said.

But Jules Morgan, the owner of KPM-Marine, a small manufacturing firm in the center of Birmingham, said Johnson has been misunderstood.

“What he really meant was ‘eff big business’,” Morgan said. “It was those businesses that were trying to derail the Brexit process. I don’t think Boris was insulting us. I think he understands small and medium-sized business.”

Morgan makes pumps and other highly-engineered equipment for boats. He says businesses like his, with an annual turnover of less than $6 million, are the real engines of British innovation, growth, and prosperity — and these companies will adapt swiftly to Brexit and benefit most from it.

But that’s not why he voted for Brexit.

As PM, Johnson will face some daunting democratic obstacles: a parliamentary majority of two, while up to 30 of his own lawmakers vigorously oppose a no-deal Brexit.