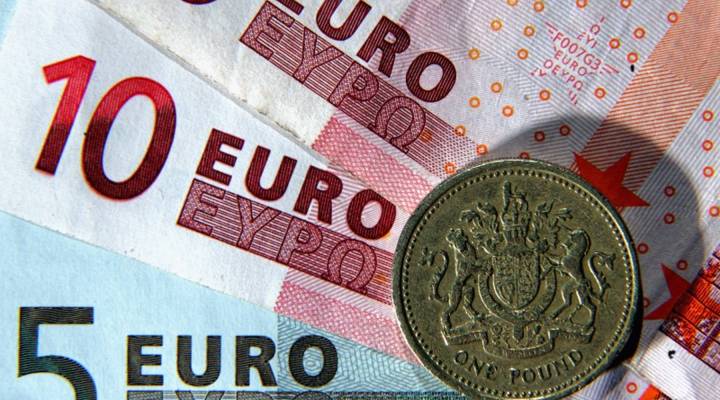 The pound dipped to a new 31-year low of $1.28 overnight, as part of the ongoing fallout from the U.K.’s decision last month to leave the European Union.

Thu Lan Nguyen, a currency strategist with Commerzbank in Frankfurt, said uncertainty is the main driver. The pound dropped precipitously directly following the June 23 referendum, and she expects the value to continue to fall.

Nguyen said we don’t even know who the next prime minister will be, let alone what his or her plans might be regarding the U.K.’s future in the EU. That uncertainty means investors are piling into so-called safe haven assets like gold, and the Japanese yen.

The latest downtick comes after a press conference Tuesday in which Bank of England Governor Mark Carney said regulators will loosen lending restrictions. The bank also released a report forecasting long-term instability in the country.

The dropping pound also has implications for people and companies here in the U.S.: First off, a lot of stuff is effectively cheaper, making imports from toilet brushes to cars potentially more appealing for U.S. buyers. On the flip side, anyone whose business depends a lot on exports might be less happy, particularly the manufacturing industry. One way manufacturers and exporters could respond is by making new investments abroad, or pursuing new merger and acquisition deals.

Another area that can suffer is tourism: People overseas are a little less likely to blow their savings on an expensive trip to Disneyland or Vegas.

Meanwhile, all eyes are on the Federal Reserve, which releases its latest meeting minutes Wednesday afternoon. A strong dollar means potentially weak inflation, which the Fed doesn’t want.

But Nguyen said the dollar is strong partly because the Fed has been saying it’s going to raise interest rates.

“If they really wanted it they are in a really good position to do it because they’re the only ones amongst the major central banks who currently are planning on normalizing monetary policy,” she said. In other words, the Fed could weaken the dollar by simply suggesting it may not raise rates.

The Fed wants to see inflation right around 2 percent, and it’s been below that.