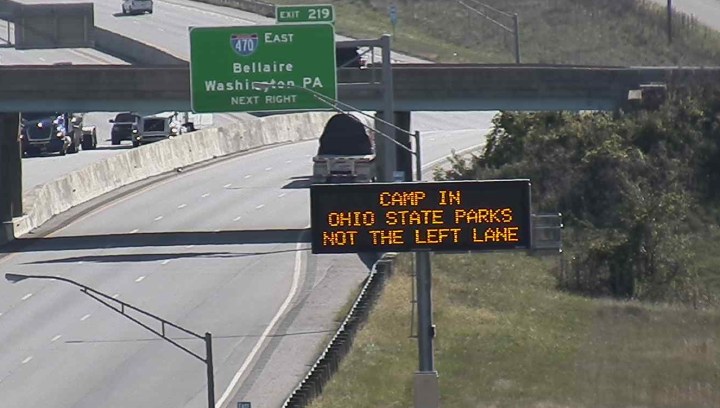 A view of a highway billboard sign in Ohio aimed at improving driver behavior. Courtesy of Matt Bruning/Ohio Department of Transportation

While driving down the highway, passing by the standard stream of company advertisements, you might have done a double take after seeing billboards with phrases like, “Visiting in-laws? Slow down, get there late” plastered in neon orange.

Across the country, states have been coming up with catchy or witty slogans that deviate from traditional safety messages in order to promote better driving habits.

For example, the Ohio Department of Transportation began launching these messages roughly five years ago after the Ohio State Highway Patrol said it was starting to see an increase in traffic fatalities around the state, according to Matt Bruning, the press secretary for ODOT. The department took inspiration from other states with clever messages, like Iowa, Utah and Arizona.

Bruning said that a committee of up to six employees from ODOT and the Department of Public Safety convenes about once every six months or so to come up with their messages.

Some of them have included state-specific references, like “Camp In Ohio State parks not the left lane” and puns, like “I couldn’t fasten my seat belt then it clicked – Dad.”

“We have found that if you can kind of hit a humorous tone, and make people smile, they’ll tend to remember it more,” Bruning said.

Like Elle Glotfelty, the Virginia Department of Transportation also wanted to know the answer to this question and commissioned a study from a group of researchers to try and find out.

At the time of the study, “Driver Response to Dynamic Message Sign Safety Campaign Messages,” which was published in early 2020, researchers were able to identify 26 states that displayed nontraditional messages.

Researchers conducted experiments with Virginia drivers, who were shown a range of messages about driving behavior and habits. They were surveyed about their perceptions, and asked questions like whether they thought drivers would change their behavior after seeing these messages. A neuroimaging instrument was then used on the participants to quantify how they received, processed and cognitively interpreted these messages.

“The short answer is, yes, they’re effective, but not for everybody. And the message itself really matters,” said Tripp Shealy, one of the authors of the study and an assistant professor of civil and environmental engineering at Virginia Tech.  “It’s complicated, partly because humans are complicated, and behavior change is really hard to do.”

One of the limitations of the study, the report noted, is that it didn’t measure actual behavior change. It was measuring potential behavior change based on indicators like the perceived effectiveness of these messages.

Kathleen Vohs, a marketing professor at the University of Minnesota, said generally, messages like these don’t change people’s behavior unless they already thought the suggestion was a good idea and they had forgotten to do that behavior, like putting on a seatbelt.

She added that the same thing applies to any COVID-19 health messages. During the COVID-19 crisis, some highway messages have told people to stay home or to wash their hands.

Vohs said the reason why these messages pop up in the first place is because they are already based on pre-existing social norms.

“Social norms are both an alternate explanation for the success of mass marketing campaigns, and also work hand in hand with them,” Vohs said. “People think, ‘Wow, you can just advertise anything and it will happen.” Sometimes it seems that way, but if you look at the broader social context, you’re like, “Oh, there are a lot of things already pointing that way.’”

But Shealy said that ultimately, based on his own research and other studies, putting up messages “doesn’t hurt to try.”

While this instance is anecdotal, Bruning recalls getting feedback from one person who said they noticed another motorist clicking in their seatbelt after spotting a billboard with the message: “That seatbelt looks good on you.”

“If we can get a couple more people to make that right decision, then certainly that makes it worth the effort,” Bruning said.

Bruning said he would argue it doesn’t cost their committee money to devise these messages, because the time spent doing so is already baked into their jobs.

“We’re not paying anybody overtime to come in,” Bruning said. “It’s all done within the constraints of our normal hours.”

Bruning said that the department displays these messages across the state, which has more than 130 digital signs. Its messages are uniform: what you see in Cleveland is what you’ll see in Dayton.

Speeding has been one particular issue in the state. So on this Sunday, ahead of Memorial Day, ODOT is putting out a message along the lines of: “This is not the Indianapolis 500. Slow down.”