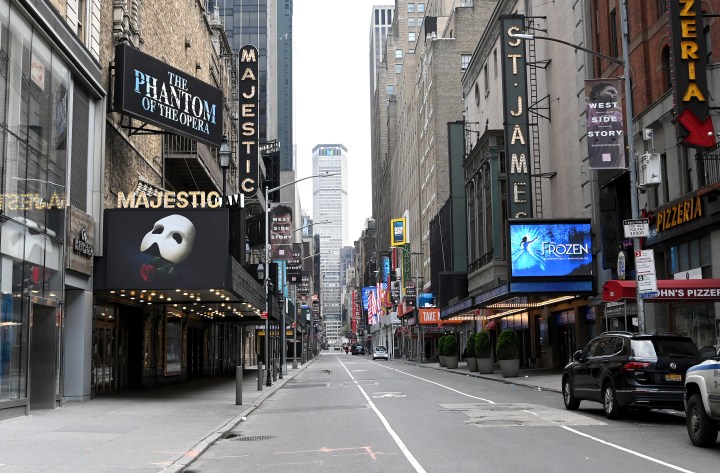 “Hamilton,” “Wicked” and “The Lion King,” three of Broadway’s highest-grossing productions, will resume performances Sept. 14. The announcement comes after New York Gov. Andrew Cuomo gave theaters the green light to open at full capacity starting May 19. Broadway shut down indefinitely March 12, 2020, and the pandemic has caused some productions to close permanently.

“Marketplace” host Kai Ryssdal caught up with Tony Award-winning producer Eva Price about what’s happening in the industry. Her latest show, “Jagged Little Pill,” is scheduled to reopen in October. The following is an edited transcript of their conversation.

Kai Ryssdal: How are you doing?

Price: I mean, can you hear it? There’s like a pep in my step. There’s a little glimmer in my eye. I feel optimistic. I feel gratitude. I feel anxious. I feel scared, but I feel excited.

Ryssdal: I was just gonna say you must be a little nervous too, right? Because there’s a lot that you have to get done between now and the 14th of September.

Price: Yeah. “Jagged Little Pill” is opening Oct. 21. So I personally have a little more time. But there’s, it’s like relaunching, Kai. It’s the beginning. It’s getting everyone back to rehearsal, creating a marketing strategy, making sure the technical aspects are still in good shape and that we’re running safely in the theater.

Ryssdal: There is a certain amount of, if you build it, will they come, right? Because the thing you got to have is bottoms in the seats in the theaters. And that, that has to be an unknown for you.

Price: Absolutely. We know that tourism is going to be down this entire year, never mind this fall. We know that international tourism is certainly going to take quite a while to come back. Tourism’s two-thirds of the Broadway audience, depending on your show. And that’s scary. You also have a group of people, myself included, that is wondering what it’s going to be like to be in a room with strangers again. There’s a lot of things to relearn.

Ryssdal: One of the things we learned out of the jobs report this past Friday was that some people are using this pandemic as an opportunity to re-gear themselves and maybe do something else. Do you have people not coming back who have said to you, “Yeah, I’d love to be in your show. But I spent the last year doing X, Y, Z, and I want to keep doing it”?

Price: Yeah, we don’t know yet. I wouldn’t be surprised if that’s the case. I certainly have heard about other friends’ shows and other colleagues that have left the business entirely. Broadway is going to come back. But it also needs to come forward. It has to change, it has to be more equitable, more inclusive. It has to understand that the people both in the seats and the people backstage and on the stage have been through an unbelievable experience. And we have to give all we can in terms of space and support and change so that they’re comfortable and they’re happy to be there. And we won’t know all the answers to any of this until we start engaging with everyone and put our changes in place both as a show and as an industry in general to make sure that people feel safe.

Ryssdal: So let’s talk about that industry for a second. Broadway is Broadway, of course, and, and the Great White Way and all that. But you, I think, are launching a touring production of “Oklahoma,” right? Your prior show. And so that means you’re rolling a whole different set of dice, right? With mobility and all of that stuff.

Price: Yeah, “Oklahoma’s” set to launch in November, and we’re gonna be on tour for nearly a year and we have a lot to figure out with that show too. We have to move city to city, we have to move a company every two weeks. We’re discovering what that looks like both from a health and safety protocol perspective, but also from a federal and state guideline perspective. And we’re learning as we go.

Ryssdal: Are you surprised that you made it? Because look, when we talked early on, you, who is, your affect is up, not down, you were way down back in March and April last year. You surprised we got here?

Price: I was, I was pretty down. I think within that sadness, I still felt optimistic that the light that I hoped was at the end of this tunnel was not an oncoming freight train, but rather a real light. I didn’t know who I’d be when we got here. I didn’t know if I’d actually feel this excited and optimistic. That might change tomorrow. That might change in three months. But Broadway has persevered for so many decades, I knew we would again.

Ryssdal: It’s interesting. It occurs to me your emotional roller coaster is not over by a long shot.

Price: As someone said to me the other day, I believe a tsunami is coming for us. And what I said to them is, “And then there will be aftershock after aftershock.” And I’m, as Stephen Sondheim said in “Into the Woods,” excited and scared.