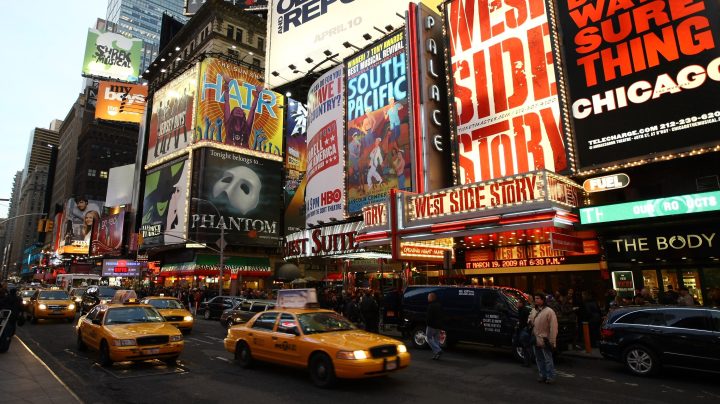 COPY
The Palace Theatre on the opening night of "West Side Story" in 2009. Neilson Barnard/Getty Images
COVID-19

The Palace Theatre on the opening night of "West Side Story" in 2009. Neilson Barnard/Getty Images
Listen Now

Earlier this month, the Broadway League announced all shows will be on hold until at least September. All productions have been shut down since mid-March, and some, including Disney’s “Frozen” musical, have said they are closing permanently.

Marketplace host Kai Ryssdal spoke with Tony-winning producer Eva Price about the future of Broadway and leading “Jagged Little Pill” through this pandemic-induced time of uncertainty. She talks to her cast and crew weekly.

Price isn’t sure when Broadway will reopen but suspects it will be at least a few more months, given all the hurdles facing the industry.

“It’s the antithesis of who we are,” Price said. “There’s no social distance for a love scene or a dance scene or a duet.”

She said knowing that “Jagged Little Pill,” based on the Alanis Morissette album, will eventually reopen is what helps her sleep at night. “The things that wake me up is the how,” she said. “How much money will it cost? How much time will it take? What will the restrictions be for our cast and audiences? I do think about it every corner of the day.”