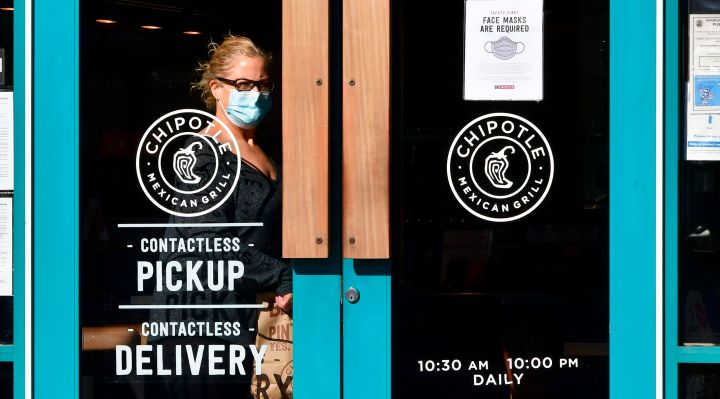 COPY
Brian Niccol, the restaurant chain’s CEO, says hiring and retaining workers will be among the biggest challenges as the company expands. Frederic J. Brown/AFP via Getty Images
Corner Office

Brian Niccol, the restaurant chain’s CEO, says hiring and retaining workers will be among the biggest challenges as the company expands. Frederic J. Brown/AFP via Getty Images
Listen Now

In a year when more than 110,000 restaurants closed their doors, Chipotle grew.

The fast-casual Mexican restaurant chain finished 2020 with about 150 more locations than it had going in and plans to open hundreds more during 2021. In first-quarter results released Wednesday, the company reported 17% year-over-year growth in in-store sales and 134% growth in digital sales.

With the economy turning a corner and restaurants competing for workers, “Marketplace” host Kai Ryssdal spoke with Chipotle CEO Brian Niccol. The following is an edited transcript of their conversation.

Brian Niccol: The thing that is most challenging for us is continuing to be able to hire [and] retain great people that are passionate about our purpose. We’re, you know, 85-90,000 employees. In the not-too-distant future, we’ll have 100,000 and then 200,000, and the challenge is, how do you keep the culture and the purpose alive and well in every single restaurant with every single leader?

Kai Ryssdal: Do I hear you saying it’s tough to hire in an economy where we’re down 8½ million jobs and unemployment is at 6%?

Niccol: You know, what’s interesting is, we have a lot of applicants that come into the business. One of the things I think that they get surprised by is, this is a true culinary job. This is not, grab something out of the freezer, throw it in the fryer, and on you go. So, we don’t have a problem with the applicant pool. I think our biggest challenge is getting people trained and up to speed so that they want to stay with us.

Ryssdal: This is an ill-formed question and you’ll probably take offense, but in a lot of people’s books, Chipotle is fast food, right? It’s basically McDonald’s, maybe a step up. And I hear you here making a really strong case, trying to sell it as, you know, as something more than that, and I wonder how you fight the common perception?

Niccol: Yeah, look. So Steve Ells, who founded the company, he had a really simple idea, which is fast food can be delicious and great food. It doesn’t have to be in those old paradigms of what people will qualify fast food as. It’s my job, frankly, our company’s job to better explain that to people — that when you’re making a choice at Chipotle, you’re choosing food done differently. I don’t know if you saw this. We just issued our sustainability report, and I do believe this point: How we grow our food will dictate how we create our future, and the more we can be convicted in doing the right things around growing food, we’re gonna end up with better food outcomes throughout the entire supply chain, which I think ultimately means a better future.

Ryssdal: You mentioned your sustainability report, and I want to turn for a second to corporate responsibility. And I want to ask about the movement now to get corporations involved in the voting-rights issue and opposing legislation that seeks to curtail voting rights. As you know, Ken Chenault and Ken Frazier, of American Express and Merck, have offered that public letter a number of days ago in The Washington Post and New York Times calling on corporations to get more involved and take a stand. And I couldn’t help but notice that Chipotle did not sign that letter, and I want to know why.

Ryssdal: One more question along these lines, and then I’ll get out of your hair. Do you believe this is an appropriate role for companies to play in this economy?

Niccol: Well, look, I think what is definitely true is I think companies need to be accountable for the values that they push through their culture [and] the way that they make their decisions. You know, I think you’re going to continue to see companies be forward-facing in this idea of doing the right thing for the community, the individual, as much as doing the right thing for the business, and I think you can do both. Frankly it really frustrates me when it gets reported, or the belief that you can’t do both. I think we’re an example of a company that does do both. And I just think that’s going to be the way forward and more and more people are going to be held accountable to doing the right thing.