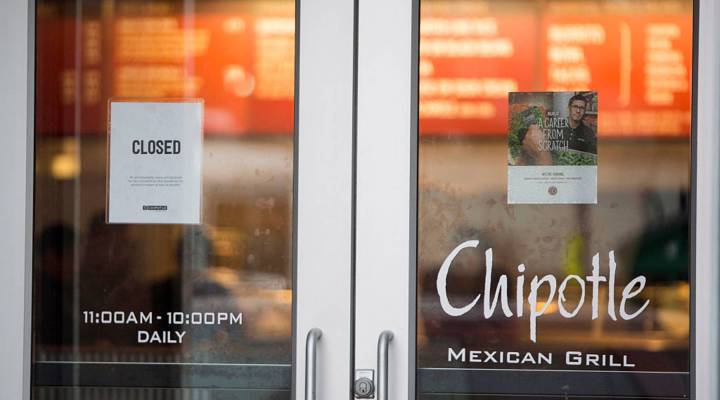 COPY
A sign showing a Chipotle Mexican Grill in Boston, Massachusetts, which closed on December 8, 2015 after 80 students at Boston College had gotten sick from eating at the fast food chain. On Monday, February 8, 2016, Chipotle will close for lunch to review food-safety protocols with employees. Scott Eisen/Getty Images

A sign showing a Chipotle Mexican Grill in Boston, Massachusetts, which closed on December 8, 2015 after 80 students at Boston College had gotten sick from eating at the fast food chain. On Monday, February 8, 2016, Chipotle will close for lunch to review food-safety protocols with employees. Scott Eisen/Getty Images
Listen Now

The fast casual chain is also launching a marketing campaign to win customers back.

Salmonella, E.coli and norovirus outbreaks tied to the chain last year turned many customers away and prompted lawsuits and a federal criminal investigation.

Seventeen year-old Howard Williams said he used to eat at a Chipotle in St. Paul, Minn. about four times a week, but not after that location was tied to a salmonella outbreak.

“I just heard about it on the news and stuff, so I try to stay away pretty much,” he said.

Williams said steep discounts could bring him back, since he finds the chain’s nearly $8 burritos costly.

But Stephen Anderson, an analyst at Maxim Group, said promotions may only bring customers in temporarily. “Those are the customers who are not the most loyal,” he said. “They come for the deals, and once the deals are done they go away.”

A new marketing campaign will focus on the quality and taste of Chipotle products instead of food quality, though the company is also establishing a website to address food safety concerns.

Carey Morrison, a customer at the St. Paul location, said she feels confident Chipotle’s new food prep and food handling protocols will prevent further problems. Among other things, the company will now use high-resolution DNA-based testing of ingredients to ensure their safety before they’re shipped to restaurants.

Millennials and avocados are key to Chipotle’s comeback