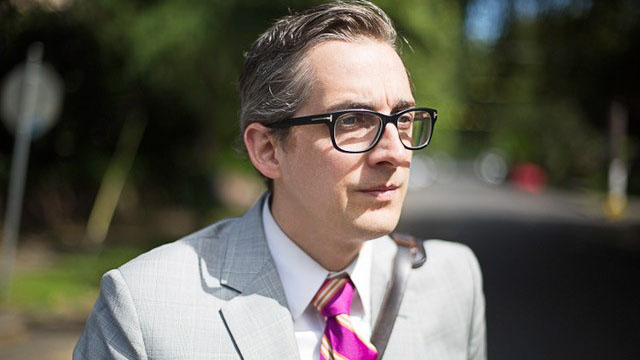 COPY
In 2008, Mike Merrill started selling shares of himself for $1 each. Courtesy of Padraic O'Meara

In 2008, Mike Merrill started selling shares of himself for $1 each. Courtesy of Padraic O'Meara
Listen Now

A few months ago Mike Merrill, a freelance creative producer in advertising, saw a job opening that piqued his interest. Should he put in an application?

He asked his shareholders — the 1,059 people (at time of publish) who’ve purchased shares of Merrill’s life, some who are friends but many who are strangers.

Among the shareholders who wanted Merrill to apply for the job were users young9599, DREAMSLOTH and FitCorgi. But the “no” votes, including from users Douglas Dollars and Becki907, won out. He didn’t apply for the job.

The experiment started in 2008 when Merrill decided to invite people to invest in his creative career in exchange for the opportunity to help guide its trajectory. He split himself into 100,000 shares and started selling them for $1 a piece, as if he were a living, breathing company.

“It was originally going to be a way for my immediate community to help get involved in these various online projects that I was doing,” Merrill told “Marketplace Morning Report” host David Brancaccio. “It quickly became clear, the — I guess you could say the invisible hand of the market drew my personal life far more into it than I had originally intended.”

His shareholders have voted on things like who he should date and whether he should get a vasectomy, input that hasn’t been universally appreciated by some in his life. So far, Merrill has sold 14,924 shares of his life, which he releases incrementally. His stock once soared to $18, on the heels of some media coverage, but these days it usually hovers just under $5.

“There’s a real ceiling there at $5, people start selling again. So hopefully I can push through that this year,” he said.

The following is an edited transcript of his interview with Brancaccio.

David Brancaccio: About a dozen years ago, you did something weird. You sold shares of … your life?

Mike Merrill: Yeah, it’s pretty weird. I became the world’s first publicly traded person. And so I decided that I had shares. I said, “Hey, I have shares now, and you can buy them and you can sell them.” And my stock price can go up and down based on people buying and selling this thing that I invented.

Merrill: It was one of those ideas of, like, someone should do this, and no one else was going to do it. So I felt an obligation to be the case study for this idea myself.

And as I did it, it was originally going to be a way for my immediate community to help get involved in these various online projects that I was doing. It quickly became clear, the — I guess you could say the invisible hand of the market drew my personal life far more into it than I had originally intended.

Brancaccio: Did money change hands, or was it just paper certificates?

Merrill: No paper certificates, it was all digital. And basically I decided there are 100,000 shares, and they’re selling for $1 a share. Let’s see what happens.

And immediately the price starts going up, which is pretty exciting. My older brother bought enough shares, and then sold enough shares, to buy a washing machine. So whenever I go over to his house, and I see his washing machine, I’m like, “Oh, that’s in memory of this weird project that I do.”

Brancaccio: And do you have shareholder meetings or anything?

Merrill: Yeah, I have a big annual shareholder meeting. Since the pandemic, it’s turned into a shareholder conference. We give a bunch of talks and, this year, we’re doing a charity poker tournament. I like to think it’s sort of the indie version of the big Warren Buffett annual event.

Merrill: It’s doing pretty good. I think I’m up over the last week, just under $5 a share. So I seem to sit somewhere usually between $4.50 and $5, and there’s a real ceiling there at $5. People start selling again. So hopefully I can push through that this year.

Brancaccio: Maybe it’s fun, or maybe it’s like this dystopian, science-fiction thing from “Black Mirror.” It’s like how many likes you’re getting on social media, in a weird way.

Merrill: Yeah, it is. And it absolutely has a dystopian element to it. And I think that’s an important thing to put up: This is not a model that in any way I’m promoting that everyone should do. I like to think of this as one experiment among many ways to organize community or do things together. And it’s worked for me in these very specific ways. But I don’t think that we should be buying and selling shares of people all the time.