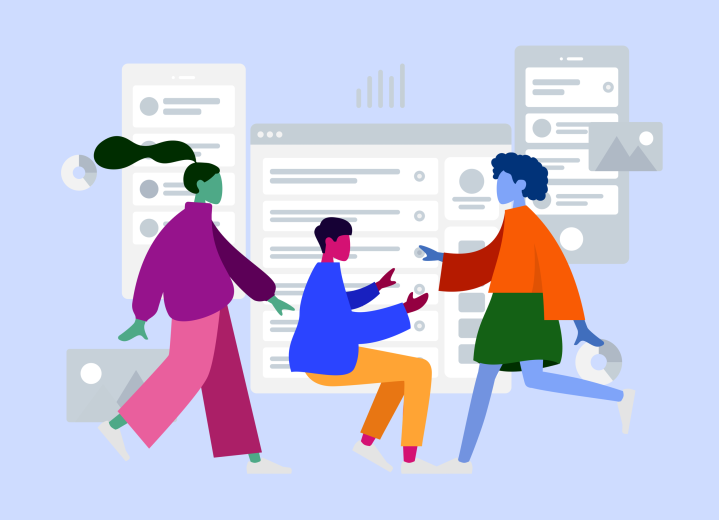 Ever notice how a lot of tech companies’ branding has started to look similar? It’s marked by crisp sans-serif fonts, pastel palettes and long-limbed cartoon figures in bright colors — maybe depicting a video chat with a loved one, or a group of software engineers physically building a smartphone app with hard hats and ladders.

That playful design style favored by Big Tech behemoths and small startups alike has a name: Corporate Memphis. Mike Merrill, a creative producer in advertising, coined the term several years ago after he kept seeing it cropping up among tech companies. And the phrase took off, as designers catalogued the style’s many varieties and criticized its pervasiveness.

“I think a lot of people won’t even notice it. It just blends into the background in a really safe, mildly pleasant, Prozac-design kind of sense,” said Merrill, who is also known for selling shares of his life to investors for $1 each.

But the deeper critique of Corporate Memphis branding, leveled by Merrill and others, is that the friendly, egalitarian world it depicts can be out of step with the reality of the companies that employ it.

“It is all about this idea of, ‘Trust me. I’m a trustworthy company.’ And let’s not look behind the curtain and see what’s actually going on,” Merrill told “Marketplace Morning Report” host David Brancaccio. “I think it’s a really nefarious way to hide behind visual language.”

The following is an edited transcript of their interview.

David Brancaccio: Tell me about this look, which you see everywhere. It’s cartoony, it’s bright blocks of color?

Mike Merrill: Yeah. It feels almost nostalgic; it’s sort of this flat, pastel, very simplified colors and shapes, yet it’s very modern and crisp at the same time. I think a lot of people won’t even notice it. It just blends into the background in a really safe, mildly pleasant, Prozac-design kind of sense.

Merrill: It will poison your mind. Once you start seeing it, you will see it everywhere. I worked in the startup world for a while, and every company, before they get their own unique design, seems to go through a phase of operating with this style.

Brancaccio: I mean, you wouldn’t see the U.S. Supreme Court or a private prisons company adopt this look, right? It’s for the tech world or other types of businesses.

Merrill: Yeah, I think it’s a very tech-focused trend. I heard it described once as, it sort of represents solved problems. Like, everything’s OK when you see this design.

Brancaccio: All right, so your beef isn’t just that it’s cliche, and no one likes a cliche. But you actually worry that maybe this approach to design makes things look benign when maybe the company underneath could be doing things that are not so warm and fuzzy.

Merrill: I think Facebook is probably the biggest example of it. They went through a phase where they were using this style universally. And, you know, they are one of the darkest companies as far as how they’re using that customer data. And it is all about this idea of, “Trust me. I’m a trustworthy company.” And let’s not look behind the curtain and see what’s actually going on. So I think it’s a really nefarious way to hide behind visual language.

Brancaccio: Now, I don’t want to be an overbearing cynic here, but branding and logos — do we really expect this stuff to convey truth? I mean, branding is spin on a stick, so we shouldn’t kid ourselves, I guess.

Merrill: I absolutely agree. I think there’s two uses of this style that you see most often. The first is those big companies. And that, to me, feels a little deceptive, like they’re trying to hide something — because it’s so generic and it’s so simplified.

On the other hand, I think it’s a valuable tool for that really young company that doesn’t have a designer on staff yet, that’s just starting out and just kind of needs something to get up and running. And it kind of puts them on equal footing from a design perspective.

Brancaccio: I see. I mean, if this design is easier and cheaper to render, a company just starting out might not be able to afford hiring Jeff Koons to paint their branding, right? They might use this approach that’s more of a template.

Merrill: Absolutely. And there are free sites that offer all of these graphics, showing these characters and people swirling around using computers and being happy and walking their dogs. So it’s literally just copy and paste functionality to look like every other one of these companies. So it’s a little bit of a safety net in terms of, you don’t have to make a specific choice. You can just kind of go with the default.

Brancaccio: All right, Mike, the term “Corporate Memphis” — doesn’t have anything to do with Memphis in Tennessee?

Merrill: Yeah, there was an arts movement that had a similar bright-color style, and that movement was called Memphis. So it’s sort of acknowledging this bright, happy, visual language, combined with the darker side of, “Let’s co-opt it and use it to sell personal information.”

"Helvetica"EEC: Documentary Studies
Tags in this Story
Share this Story