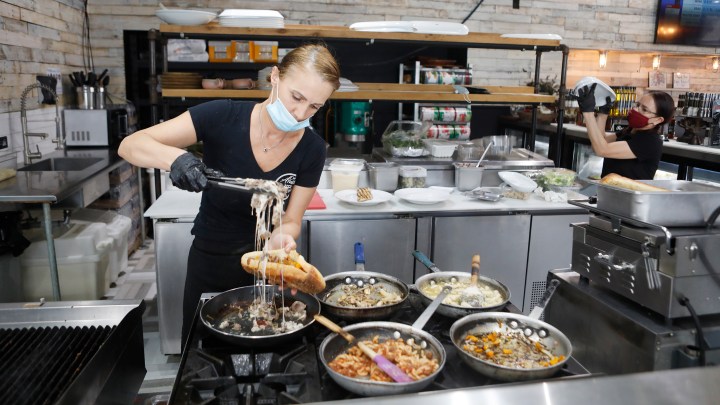 COPY
This March, spending at restaurants rose by more than spending at grocery stores, a positive sign for economic recovery. Octavio Jones/Getty Images

We got two pretty striking pieces of economic news this morning. Retail sales jumped almost 10% in March — that’s the biggest jump we’ve seen since last May. Meanwhile, jobless claims fell to their lowest level since the pandemic started. And within that data are plenty of hints about where the economy’s headed. We called some economists to see what they noticed in today’s data.

That average dropped by 50,000 claims. Bahn said that’s a sign that the economy is laying the groundwork for a recovery. “We need to make sure that that recovery is shared among all workers. But what we need is a solid foundation of job growth, and we are getting to that place.”

Pearkes said that kind of spending can ripple throughout the economy. For instance, look at food and the fact that spending at restaurants rose by more than spending at grocery stores. “That’s going to have a bigger impact on employment, on tax receipts, on the commercial real estate market,” he said.

Some of that spending might be a little too hot at the moment. Wells Fargo senior economist Tim Quinlan singled out motor vehicle and parts sales, up 15% from last month. “You don’t need to replace your car that regularly. So there is some risk we could see some softening in those categories in the middle part of this year,” he said.

Should that happen, Quinlan added, any weakness could be outweighed by strength in services spending as the economy opens up.