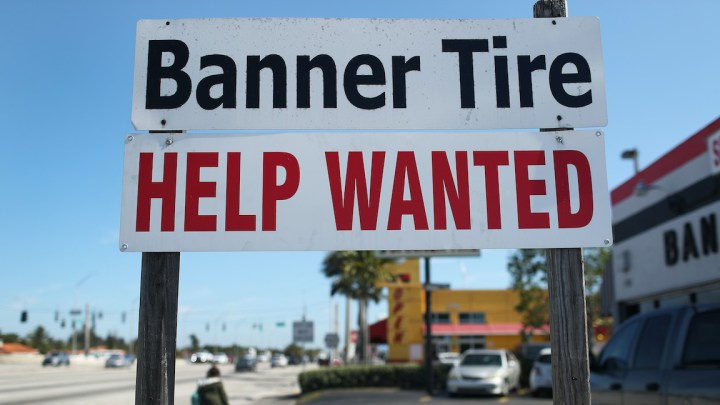 Thursday morning we got the weekly jobless claims report, and the news was not good.

That’s after falling below 700,000 the previous week for the first time since the massive wave of pandemic layoffs in March of last year.

Now, we, and lots of economists, have been treating these weekly jobless claims numbers as a good indicator of where the job market stands.

But there are some pretty good reasons to stop paying such close attention to it, because other indicators are telling us the job market’s recovering quite nicely.

It’s definitely not a good sign that first-time jobless claims are back above 700,000, according to Robert Frick at Navy Federal Credit Union. But, he said, “we fixate on it too much, given how inexact the numbers are.”

Jobless claims are volatile week to week. There are waves of fraud and weather effects.

The four-week moving average hasn’t been this low since the pandemic started.

Frick predicted jobless claims will fall over time — as the weather warms up and vaccination accelerates. “Airline reservations, restaurant reservations, Google tracking people’s movements — all that stuff is moving in the right direction, and you can translate that into job growth.”

That’s what Manny Rodriguez is seeing in Chicago, where he runs Revolution Workshop, a training program for the construction trades.

“So we’re absolutely seeing a rise in demand,” Rodriguez said

He’s got 21 student-apprentices now, and he’s confident they’ll find good-paying construction jobs as infrastructure spending ramps up. “You have all these projects kicking off. You have a vast amount of people, especially in the minority communities here in Chicago, that have been adversely affected from COVID.”

Nationally, there’s plenty of evidence the economy’s picking up.

The number of hourly work shifts rose strongly in March, especially in manufacturing, said Dave Gilbertson at payroll processor UKG — a current Marketplace underwriter. “Manufacturing is usually a leading indicator of retail and hospitality, and even health care to some degree.”

“As of last Friday, job postings were up 13.5% above pre-pandemic,” said AnnElizabeth Konkel, an economist at the Indeed Hiring Lab.

“That number sounds absolutely fantastic. But we really need job postings to stay above their pre-pandemic baseline for a while” — to put millions of people who’ve become unemployed during the pandemic back to work.