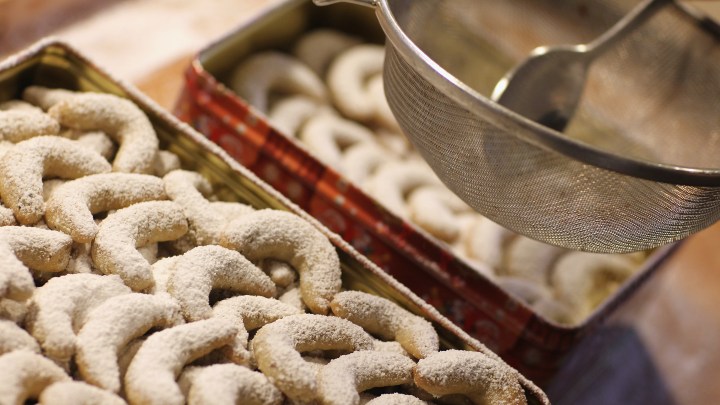 COPY
Some new at-home chefs hope to expand their businesses into commercial kitchens. Others plan to stick to cooking and baking as a hobby. Sean Gallup/Getty Images

Some new at-home chefs hope to expand their businesses into commercial kitchens. Others plan to stick to cooking and baking as a hobby. Sean Gallup/Getty Images
Listen Now

It’s a few days before Easter and Maddie Gartmann was making royal icing, the first of many batches. She poured so much meringue powder into her KitchenAid mixer, she had to cover it with a towel so a cloud of white dust didn’t take over her tiny kitchen.

“There is such a thing as overmixing, so that’s why I have my timer going — to make sure I don’t overmix,” she said, peeking under the towel to check the icing’s consistency.

Gartmann is a stay-at-home mom in South Saint Paul, Minnesota, and she used to bake just for fun. But now it’s about her business, Garty Goodies. The icing she’s making will go into a few dozen cookie kits: $30 for 10 pre-baked cookies, three colors of icing and the tools to transform them into Easter eggs, bunnies and baby chicks. She started selling the kits online when the pandemic hit.

“They just sold out like crazy,” she said. “There were times that people would message me five minutes into posting and I’d have them all sold out.”

She also took her cookie-decorating skills to TikTok with how-to videos. And after a couple of months on the platform, Garty Goodies has nearly half a million followers. The videos are bringing in enough money to justify building a studio in her basement.

With the pandemic forcing millions of Americans into layoffs or leaving their jobs to take care of their kids, a lot of people have started running canning, cooking and baking businesses out of their kitchens. Registration for home food processing went up nearly 70% in New York state last year, according to its Department of Agriculture and Markets. And it’s up almost 1,000% since it became legal in Minnesota a little over five years ago, according to the Minnesota Cottage Food Producer’s Association. Many states expanded cottage food laws as recently as last year, just in time for the pandemic.

Ben Grossman started Benny’s Bagels out of his parents’ kitchen in Arlington, Massachusetts, after being laid off as a traveling chef with Cirque du Soleil.

“One of my friends was just like, ‘Hey man, you love bagels. You should just start making some bagels.’ You know, I was making 12 or 16 at a time, and all of a sudden I was making 250 or 300 bagels in a week. And I just kinda looked up and was like, ‘I think I might have a business here,'” Grossman said, laughing.

Benny’s Bagels has all the usual flavors, plus asiago, sriracha and broccoli cheddar. They go for $2-$3 apiece, and Grossman does $1,600 a month in sales. It’s about all he can manage from a home kitchen.

Grossman’s hours run 5 a.m. to 5 p.m. because Mom and Dad shut down the operation during dinner. And the work is exhausting. He’s broken so many mixing bowls that he now kneads the dough by hand. He’s looked into commercial kitchen space, but the rent would eat up half his sales. He also considered opening a store.

And for most home cooks, that’s a pretty big leap. Kathrine Gregory, president of the New York Small Scale Food Processors Association, has seen a lot of home cooks try to make that leap — and fail.

“It just required more time than they expected, more effort than they expected” and also an understanding of the costs, profit margins and marketing it takes to make your salad dressing or hot sauce successful. Gregory said hot sauce is the thing right now among home cooks.

Then there are all the rules. Massachusetts requires kitchen inspections. In Oregon, it’s OK to make bread, but not focaccia. In North Carolina, certain sauces have to be sent to a lab for testing.

Gregory likes to remind people that “there is nothing wrong with doing this as a hobby.”

“I’m not doing it for money. I’m enjoying when people say they love my food,” she said. “That’s it.”

Making fresh samosas and chutneys has kept her going in a year when she’s been too scared to leave her home. “If you don’t have anything to do or no plan in your mind that what you will do tomorrow morning, it makes you really upset.”

Gartmann, of Garty Goodies, thinks one reason her cookie kits are most popular with adults is that those adults need a break from Zoom and Netflix. She would like to eventually sell these kits in stores, with recipes for making the cookies and icing yourself plus tools and decorations. She wants to keep running her business from home, she’d just like to spend less time in the kitchen.