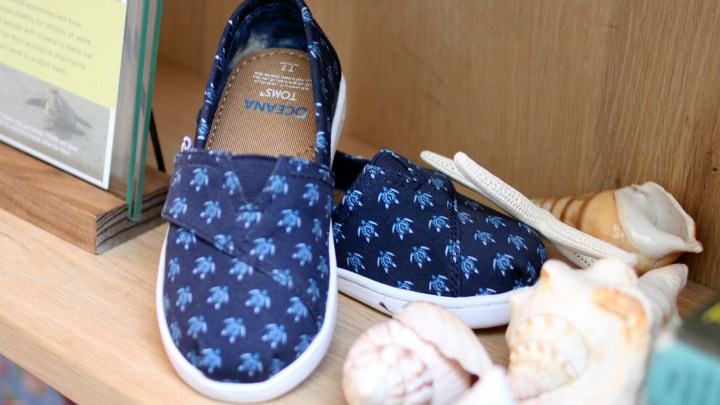 COPY
A pair of Toms shoes. A child may need shoes, but what if other needs are more pressing? Randy Shropshire/Getty Images for Oceana

A pair of Toms shoes. A child may need shoes, but what if other needs are more pressing? Randy Shropshire/Getty Images for Oceana
Listen Now

The shoe company Toms is known for its one-for-one business model; when it sells one pair of shoes, it donates another to a child in a developing country. But the company recently announced it is scrapping that model. Instead, Toms will focus on giving away one-third of its profits to organizations that address issues like gun violence and mental health.

Toms started 15 years ago because of a trip the company’s founder took to Argentina. He saw kids there who didn’t have shoes, which put them at risk for intestinal worms, a disease you can catch by walking through contaminated soil with bare feet.

“I think the whole idea was to actually make a difference for these kids, that, you know, Blake Mycoskie observed this problem and he looked for a business model to try to actually help them solve it,” said Chris Marquis, who teaches social entrepreneurship at Cornell.

The one-for-one model caught on. Lots of companies started doing it, most notably Warby Parker, with its eyeglasses, and Skechers, which mimicked Toms’ approach and shoe design.

But this model, in which a company tries to do good by giving away a particular product, has downsides.

“You may be giving away a product that doesn’t actually serve the needs of the people in the communities where you’re giving,” said Katherine Klein, vice dean for social impact at the Wharton School.

If the recipient doesn’t need that pair of shoes, he or she could sell it for cash. But that’s a pretty inefficient way to help people.

“A second potential issue is by giving away, say, hypothetical umbrellas, you disrupt the local market. You hurt the people who sell [and make] umbrellas in that community,” she said.

Now, Toms did research on this and made changes so its help was more targeted and wasn’t as likely to hurt local businesses. It says now at least a third of its shoes are manufactured in the countries where they’re donated.

But still, there’s an argument that to have the most impact, it’s often better to donate money than a particular thing.

For instance, a child may need shoes, but “what if that’s not their really most pressing need?” said Dean Karlan, who teaches economics at Northwestern University. “The cost of those shoes maybe is $3, but those $3 could be much better spent by that household on some other issue that they’re facing.”

When you give money instead, you’re giving flexibility.

There are exceptions, he said.

“If someone is in a developing country, and they do not have access to a market to buy a bed net, for instance, to protect their children from malaria, giving them $5 doesn’t really help,” Karlan said.

In that case, you’re better off giving them a bed net.

The challenge is knowing what to give and where.