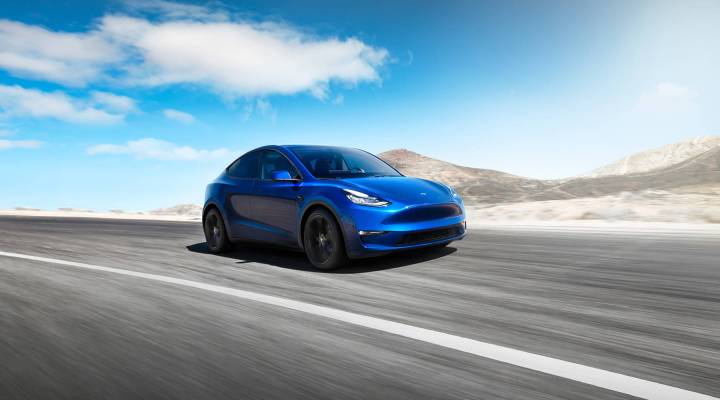 At a launch party in Los Angeles last night, Tesla revealed what could be its most important vehicle yet. The Model Y is a small, all-electric SUV, that looks a lot like a taller version of the Model 3 sedan.

Elon Musk’s company is promising to price the Model Y for mass-market sales, starting at $39,000 (rising to $60,000 for a “Performance” model). Musk believes it has the potential to become their best selling vehicle. “We’ll probably do more Y than S, X, and 3, combined,” he said on stage at the event at Tesla’s design studio in Hawthorne, which was transformed into something resembling a nightclub, with lights, loud music and a bar. It was packed with Tesla enthusiasts eager for a first look at the Model Y.

The cheaper version of the new vehicle starts with a battery that will last drivers for up to 230 miles. A bigger battery will give 300 miles of range. The regular Model Y will do 0-60 mph in 5.9 seconds, while the Performance model can cut that ramp up time down to 3.5 seconds. The vehicle is simpler than the larger Model X SUV, which starts at $88,000. There are no “falcon wing” doors, and the interior has just one central touchscreen, like Tesla’s Model 3.

Tesla’s usual approach is to build the more expensive versions of its vehicles, the ones with higher profit margins, first, as it scales up production. Every vehicle it’s produced so far has been significantly delayed, so expect a wait for that cheapest version to actually go on sale. The company launched the Model 3 sedan in July 2017, but only made the long-promised, lowest price version — at $35,000 — available for sale in February. Tesla also recently backtracked on a cost-cutting decision to close all its retail stores, now saying it’ll close only around half of them, and announced it is raising vehicle prices by around three percent.

It’s important to Tesla’s future that it eventually delivers the Y at volume. American car buyers are turning away from sedans in favor of pickups and SUVs, leading Ford and General Motors to discontinue most of their cars. Despite that, the Model 3 sedan was the best-selling luxury vehicle of any type in the US last year, so expectations are high for the Y.

By keeping it the vehicle simpler than the Model X — which was almost two years late to market because of technical challenges — Tesla will be hoping for a smoother and faster production ramp up. Deliveries are due to start at in the fall of 2020.