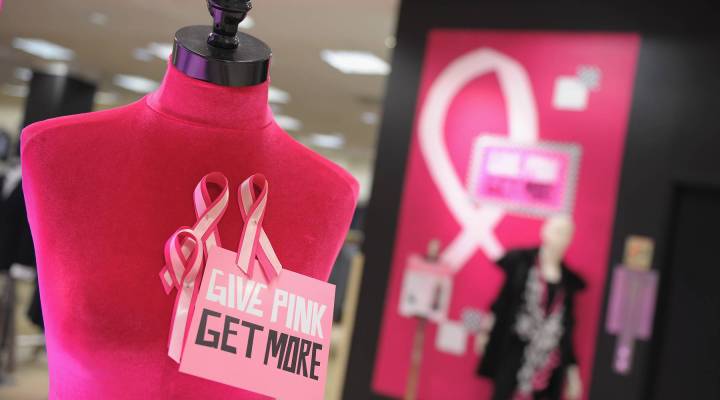 You may not be familiar with the term “cause marketing,” but you’ve probably seen it. At the Paseo Mall in Pasadena, California, a pink-colored LED light display provides a nighttime backdrop. It’s part of the mall’s “Paseo Goes Pink” campaign for Breast Cancer Awareness Month, which is October. Customers are encouraged to take photos of themselves under the lights, which enters them into a raffle.

“The campaign is all month long,” said Sarah Neuman, the spokesperson for the mall. “So from Oct. 1 until the 31st.”

And it’s not just this mall — you can find pink shirts, bracelets, even “Kick the cancer” drink cozies all over the United States.

This practice is generally called cause marketing. It’s different from straight-up philanthropy because the cause itself is intertwined with ads and product sales. Critics say cause marketing has more emphasis on market than cause. California Assembly member Laura Friedman, who is a breast cancer survivor herself, is one of these critics.

“We allow companies to get away with turning products pink,” Friedman said, “and saying that it supports breast cancer research without any accountability about how much they’re giving.”

It can be tricky to figure out exactly how much money cause marketing raises for charities. According to consulting firm ESP, companies spent about $2 billlion on sponsorship last year. But John Trybus, the managing director at the Center for Social Impact Communication at Georgetown told us via email that this number only applies to things like putting their logos on Special Olympics banners. It doesn’t account for merchandise like those drink cozies or for product partnerships where a company donates a percentage of their product sales.

In other words, that $2 billion is only a piece of a much larger market. But while the exact size of the market is hard to measure, one thing is clear: Cause marketing is good for a company’s bottom line.

“Cause marketing is just one way of letting your audience know that you’re caring for the causes that they care about,” said Joe Waters, a cause marketing consultant who runs the site selfishgiving.com. “And that gives you a halo, a reputation, and that, hopefully, will turn into more opportunities for customers to purchase some things from you.”

In an interview with Marketplace Weekend host Lizzie O’Leary, Waters said that cause marketing has been really powerful for several brands — Patagonia and Toms shoes, in particular.

“One of the positive signs, I think, in the marketplace,” said Waters, “is that companies are looking at how they can support local organizations. Just as companies are driving towards personalization in their communications with consumers. They’re really trying to personalize.”

Still, Waters admitted, some businesses are much more interested in the marketing, not so much in the cause. In 2013, a report from ESPN revealed that of the profits made from the NFL’s Breast Cancer Awareness merchandise, only a small portion made it back to the American Cancer Society — about $11.25 for every $100.

“There are some great examples out there of companies who have who really helped causes with their missions,” Waters said. “The NFL is not a great example of someone who is giving back a lot with their campaigns.”

At the same time, Waters doesn’t think that the corporate checkbook is necessarily the best way to help out a cause. Instead, he said, it’s about reaching the customer.

“The best thing a company can do is activate its stakeholders to support a cause,” Waters said.