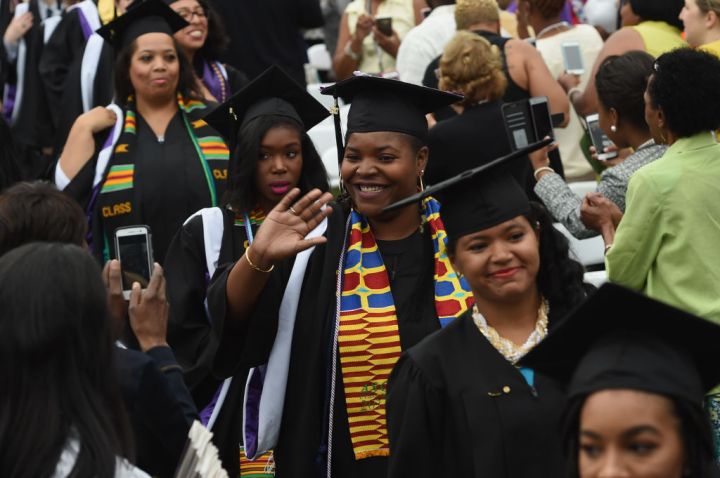 When it comes to the racial wealth gap, education has long been seen as an equalizer. And while education level does usually correlate with higher wages and lower unemployment, a recent paper from the Institute on Race and Political Economy at the New School found that when it comes to reducing racial inequities, education alone often isn’t enough. Marketplace’s Kimberly Adams spoke with Darrick Hamilton, the founding director of the institute and a co-author of the paper. The following is an edited transcript of their conversation.

Kimberly Adams: Where did this idea come from, that education could help close the racial wealth gap and address economic inequality more broadly?

Darrick Hamilton: It just seems to be that every presidential administration, at least since Richard Nixon, has always advocated as the only solution is “get an education, get a good education.” Ironically, not only do disparities remain, they get worse with higher levels of education.

Adams: But it’s not just policymakers, it’s also families and our society. I mean, my parents [when I was] growing up said education is the way to everything.

Hamilton: And I think it has something to do with an aesthetic of wanting to have agency in your life, to want to be the captain of your fate. And there’s nothing wrong with that. But what it negates is some of the structural barriers that exist in society, irrespective of whether somebody has an education or not.

Adams: So talk to me about those barriers. What did you find in your study about what education can and cannot do for people?

Hamilton: To be clear, more education is better than less education. What’s at issue is, does education in and of itself, solve the racial disparity? You know, we found the astonishing result that at higher levels of education, disparities increased. So for example, it’s not a surprise that Blacks fare worse during an economic downturn than whites. The conventional wisdom is that because Blacks presumably have lower skills compared to whites, that they do worse through recession. But if you were to look across education groups, even in that high skill-strata of those with a college degree, what you find is that, relative to whites, blacks through a recession fare even worse, so the negative returns associated with one’s race is more pronounced when you have a college degree.

Adams: If education is indeed not the sort of big-picture solution that many people and policymakers have painted it to be, what then are the solutions to meaningfully closing the racial wealth gap?

Hamilton: Capital itself. The ways in which wealth is generated is capital begets more capital. Or put more plainly, wealth begets more wealth. So the key thing is being given an asset that’s going to passively appreciate over your lifetime. So that’s why we need a public sector that ensures that everybody has access to capital, for example. We can also make sure that people have pathways for debt-free college education. A college degree is associated with a lower wage for a Black college graduate than it is a white college graduate. And what’s more, the wage disparity between Blacks and whites is higher for those with a college degree than those with, say, a high school degree or those who have dropped out of high school. Because of the existing racial wealth gap, Black people have to take out more student loans, so they graduate with upwards to $50,000 in debt. That’s immoral. It’s immoral that they have to pay more for something like a college degree that has a lower return for them, relative to their white peers,

Adams: Plans and proposals and policy initiatives, obviously very important, but then there is the politics. How do you see the political feasibility of maybe doing some of these recommendations that you lay out?

Hamilton: What we saw this summer was across all 50 states and frankly, across the entire globe, protesters shouting in unison that Black lives matter. So the question of can we get to policies that are really going to redress our historical disparities? I think we have an opportunity to do so. I think we’re at a moment where people are clamoring for economic justice, and economic justice necessitates racial justice.