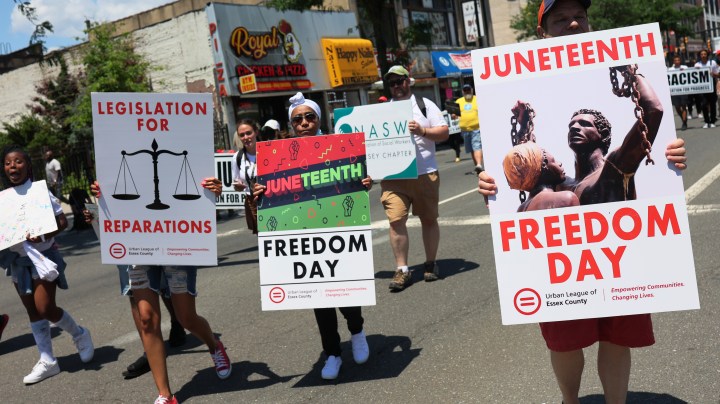 Juneteenth commemorates the day in 1865 when enslaved Black people in Texas found out about the Emancipation Proclamation, two years after it was issued. It marks the end of slavery in the United States, when white slave owners profited from the coerced, unpaid labor of Black Americans. And while the emancipation itself is nearly 160 years old, the economic emancipation of Black Americans is an ongoing story.

A recent study from the National Bureau of Economic Research found that in 2019, for every $1 of wealth belonging to white Americans, Black Americans had 17 cents. So why has this wealth gap persisted for over a century and a half since the end of slavery?

Darrick Hamilton is the founding director of the Institute for the Study of Race, Power and Political Economy at the New School in New York and a key architect of several public policy proposals aimed at addressing racial equity. Marketplace” host Kimberly Adams spoke with Hamilton about the historic systems and laws that kept Black Americans from building wealth over the last century and a half.

Kimberly Adams: What was the state of Black wealth in the United States at the end of slavery?

Darrick Hamilton: Well, it was not zero. But the reality was that, en masse, Black people served as a capital asset for a white landowning plantation class. But there were some emancipated Black individuals that did have some wealth — so it certainly wasn’t zero, but it was grossly unequal.

Adams: In the decades immediately after slavery, what was the experience like for Black people trying to build wealth? What sorts of structural and legal issues did they run into?

Hamilton: Well, we had an evolution from a chattel slavery system to a sharecropping system, a system in which — as a result of not being owners of land — Black people were tenants of landowners. Despite political obstacles, despite literal violence, a surprising amount of agricultural land, farmland, had been accumulated since emancipation up to probably about, the height around 1910 or so.

Adams: Can you talk a little bit about, at the beginning, through this era that you’re talking about around 1910, what sorts of legal and structural obstacles were there to Black people trying to build wealth?

Hamilton: Well, part of the New Deal, part of the reaction to some of the conditions that were going on as a result of the Depression, led to the United States Department of Agriculture trying to engage and promote farm ownership in a way to facilitate economic security for the American people. So although the legislation didn’t say that Black people would be excluded, the implementation and management of these programs in a local Jim Crow context was done in a way that was very exclusionary and actually predatory. So, for example, there would be delays, and when a loan might be approved, the recipient, if they were Black, would receive the loan after the harvest had already taken place. They weren’t able to generate crops in order to go to market and generate resources, and they were vulnerable. And then we also note a history of just outright terror that was taking place. One famous incident is the Tulsa [Oklahoma] race riots, but well beyond Tulsa, there was a great deal of just violence. And trying to force [Black] people to leave that actually owned land, and then that land became available for white people.

Adams: What’s the legacy of not only the hundreds of years of enslavement but then also these barriers after the institution ended?

Hamilton: The legacy is a country that devalued a people based on their identity. Whenever we think about political economy, it’s not novel if we talk about an economy or if we talk about policy and politics. But what has been problematic in American history is that Black people themselves, that identity, when it came to transaction, if they engaged with a white person, the identity itself put them at a disadvantage. And the reason it put them at a disadvantage, they have never had equal protection under the law the way a white person has.

Adams: Fast forward to the modern era. There are estimates that even if wealth accumulation was equal between Black Americans and white Americans over the last 160 years since slavery, it still wouldn’t close the racial wealth gap. That NBER study that I mentioned earlier estimated that, even given equal conditions, it would still take 200 more years for the Black and white wealth gap to converge. Why are Black Americans still so far behind?

Hamilton: Well, the way that wealth is generated is it takes capital to generate additional capital. And what’s more, capital grows in an exponential way. So, if there’s a gap to begin with, if you do nothing, a population will never catch up. But there’s a silver lining in this story. When we think about wealth throughout American history, even for white people, it wasn’t as if an asset-based white middle class simply emerged. It was public policy that helped a white middle class to emerge, policies like the GI Bill or a debt-free college education. So, the good news is that although this gap is dramatic and large, it can be redressed. We can change that history, that sordid history, and make sure that everybody has the financial wherewithal to really have the sovereignty that wealth brings.