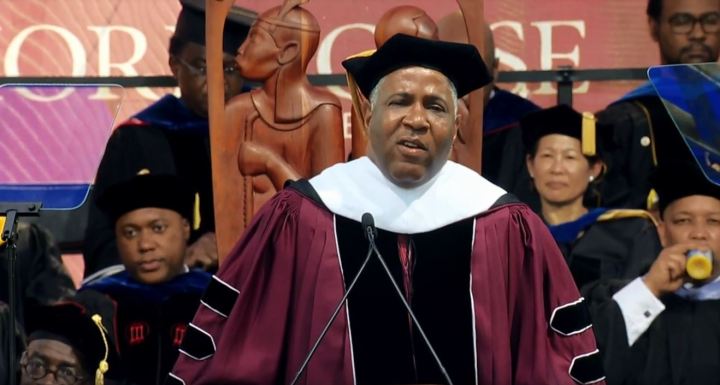 Shouts of joy erupted at Morehouse College’s commencement on Sunday when billionaire philanthropist Robert Smith pledged up to $40 million to pay off graduates’ student loans. Smith is founder, chairman and CEO of tech investment firm Vista Equity Partners, and during the graduation speech for the nearly 400 students and their families, called for others to make similar gestures of generosity.

While Americans in general carry almost $1.6 trillion in student loan debt, African American students tend to “borrow more than any other group, and they borrow at higher rates,” said Lorelle Espinosa, vice president for research at the American Council on Education. “About one-third of black bachelor’s degree recipients accumulated $40,000 or more in debt compared to 18% of students overall.”

There are several reasons for the disparity, including black students’ “disproportionate” enrollment in for-profit colleges. Mark Huelsman, a senior policy analyst at the think tank Demos, said the realities of racial inequality in America also play a role.

“The typical black college educated household has a similar amount of wealth as the typical white household where the head dropped out of high school,” Huelsman said. “And black students also find themselves when they do leave school in a labor market that really systematically denies them the same opportunities to build wealth and maintain a foothold in the middle class.”

That’s what makes the Morehouse gift all the more significant, said David Sheppard, senior vice president at the Thurgood Marshall College Fund, which supports historically black colleges and universities like Morehouse, where tuition and costs of living can reach close to $50,000 a year.

“Not to have that kind of debt, and to have a clean slate when one graduates from school, and to be able to build wealth and create savings for oneself once they graduate is significant,” said Sheppard, who notes he graduated in 1995 and will be paying his student loans until 2032.

The racial wage gap means that paying off student loans can take longer for African Americans, and many black borrowers end up owing more than they originally borrowed.

Fenaba Addo, an assistant professor of consumer science at the University of Wisconsin-Madison, found in her research with colleagues that the disparities in student loan debt have ripple effects long after black students leave campus.

“We looked at wealth profiles and found that student debt was explaining approximately around 10% of the racial wealth differences between white and black in adults,” she said. “So if we were to remove that debt alone, or equalize across races, the racial wealth disparity would decline by about 10%.”

Many researchers will be watching the 2019 Morehouse graduates to see how that difference graduating with zero debt really makes.