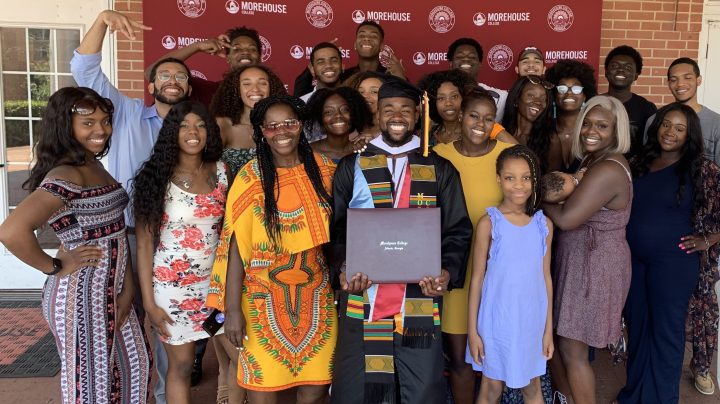 COPY
Elijah Dormeus is “literally still in awe of the love that was given to the class, all 400 of us.” Above, Dormeus is surrounded by his family at his Morehouse graduation in 2019. Courtesy Elijah Dormeus

Elijah Dormeus is “literally still in awe of the love that was given to the class, all 400 of us.” Above, Dormeus is surrounded by his family at his Morehouse graduation in 2019. Courtesy Elijah Dormeus
Listen Now

Two years ago, on a hot, sunny day in Atlanta, Robert F. Smith did something no other graduation speaker has done before or since. He told the Morehouse College class of 2019 that he was going to pay off all their student loans.

“On behalf of the eight generations of this family who have been in this country, we’re going to put a little fuel in your bus,” the billionaire investor said near the end of his speech. “This is my class, 2019. And my family is making a grant to eliminate their student loans.”

In the audience, Jarvis Mays, one of the co-valedictorians, was sitting next to a dean.

“I just looked at him and I said, ‘Is he serious?’ And he was like, ‘I guess. I’m just shocked as you are,’” Mays said with a laugh. “No one knew this was going to happen.”

Frank Lawrence Jr. remembers standing up and clapping, along with the rest of the class, and wondering, “Is this really happening?”

$34 million in student loans paid off

Later that summer, Smith made good on his promise and paid off roughly $34 million in loans that both the graduates and their parents had taken out.

The fact that Smith gave that gift to a class at Morehouse, a historically Black men’s college, was particularly significant because Black Americans “are more likely to graduate with debt, and that debt increases over time,” said Dorothy Brown, a law professor at Emory University and author of “The Whiteness of Wealth: How the Tax System Impoverishes Black Americans — and How We Can Fix It.”

Black students tend to borrow more money than white students to go to college, and students at historically Black colleges and universities, in particular, borrow nearly twice as much as students at non-HBCUs. At Morehouse, more than 85% of students take out loans. In 2019, the average debt at graduation was between $35,000 and $40,0000. Black students are also more likely to pursue graduate degrees and take on more debt.

“Not only are their debt loads higher, research shows Black college graduates are more likely to send money home to their parents and other family members, and white college graduates are more likely to receive money from their parents or grandparents that allows them to build wealth,” Brown said. “Student debt is a significant drag on Black college grads who have done everything right, their ability to produce wealth going forward.”

For him, getting out of Morehouse debt-free has given him more peace of mind in medical school.

“I knew that the path that I was on was going to accrue a lot of debt,” said Mays, who’s now in his second year at the University of Pennsylvania, studying to become a surgeon.

Medical students graduate with more than $200,000 in debt on average, and more than 40% come in already owing money for their undergraduate degrees.

“So just to kind of focus on school and not necessarily look at a number and know that that’s waiting for me to pay back, that was a huge relief that made me go into medical school with a clearer head,” Mays said.

For many of his friends and classmates who are not still in school and are now working, having their undergraduate debt paid off has put them in a position to buy homes, invest and start to accumulate some wealth, things many of them otherwise wouldn’t have been in a position to do for years, he said, “because if you’re constantly just owing money, it’s hard to accumulate wealth and be able to pass that down to generations that come after you.”

It is still too early to really know how much Robert F. Smith’s gift will change things for the Morehouse class of 2019. Many, like Mays, are still in school, and others are just starting their careers. But for Frank Lawrence Jr., it has already changed a lot.

“Over the last two years, it’s been so significant,” he said. “Because I have that space and freedom to take risks … I’ve made decisions that I wouldn’t have thought I would ever make,” like quitting a job that wasn’t quite right and trying to start his own nonprofit.

Lawrence wasn’t even supposed to be in the class of 2019. He started out as class of 2018. But his junior year, he got a D in a key psychology class and ended up being held back a year. That turned out to be his lucky break, because if he’d passed that class and graduated when he was supposed to, “I would have had to pay back $65,000 in student loans,” he said.

Instead, every penny of those loans that Lawrence and his mom took out to pay for Morehouse was paid off.

Not having student loan payments has also allowed Lawrence to build up savings and also start investing in the stock market.

“It was something that I was always interested in, but I knew that I didn’t have the capital or the time to invest in investing,” he said.

Now he does. Every two weeks, he puts about $90 into the market.

“I’m really just starting out,” he said. “But it really feels like I’m … not trying to get to that moment of, ‘Finally, I’ve paid off my loans, and I’m able to start saving and investing.’ But I’m able to start that now and then see where it puts me in a year to five years from now.”

Two years after graduation, Elijah Dormeus is “literally still in awe of the love that was given to the class, all 400 of us,” he said.

Dormeus and his mom, who raised nine kids in a low-income housing complex in New York City, had taken out over $100,000 in loans to pay for Morehouse. Having all of that paid off right after graduation lifted a huge burden — for him, his mom and for his younger siblings.

“Now my brothers can go to college off of her. They get scholarships off of her, they could do anything they want,” he said.

Dormeus, who is currently working full time at AT&T and also building his own nonprofit, is determined to pay it forward and help other students from low-income backgrounds.

That’s something he was passionate about, and already working on, well before graduation. It’s also something Robert F. Smith charged the class of 2019 with doing in his graduation speech that day.

“I want my class to look at these alumnus, these beautiful Morehouse brothers, and let’s make sure every class has the same opportunity going forward,” he said.

Two years later, Smith now meets with members of the class once a month to talk about how to do that.