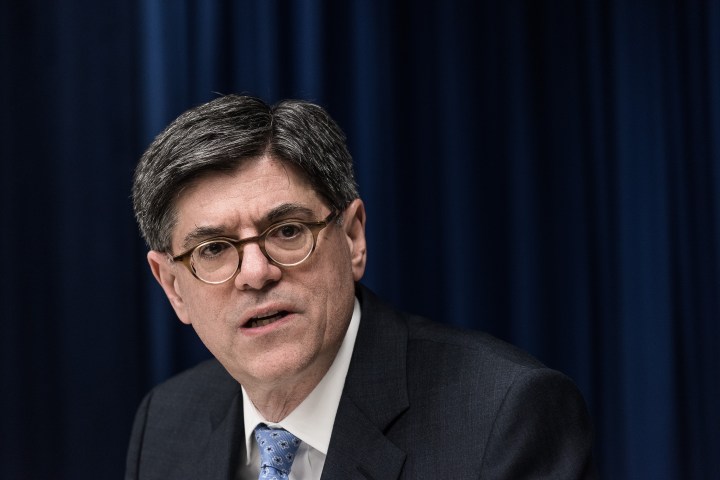 COPY
China's Belt and Road Initiative is "as much about securing trade and supply lines as it is about expanding China's presence in the world," according to former U.S. Treasury Secretary Jack Lew. Philippe Lopez/AFP/Getty Images

China's Belt and Road Initiative is "as much about securing trade and supply lines as it is about expanding China's presence in the world," according to former U.S. Treasury Secretary Jack Lew. Philippe Lopez/AFP/Getty Images
Listen Now

China’s “Belt and Road” initiative is a massive infrastructure project President Xi Jinping launched in 2013 to build physical and economic infrastructure across Asia, Europe and beyond. As development continues, typically financed by loans from Chinese banks to foreign governments (which have ignited debates over predatory lending), it’s fueling a rapid expansion of China’s political and economic power in 139 countries so far.

And aspects of the Belt and Road initiative represent a significant challenge for U.S. interests, according to a new Task Force report from the Council on Foreign Relations, which urges more assertive action from U.S. leadership in response to China’s actions. Jack Lew, co-chair of the task force and former U.S. treasury secretary during the Obama administration, outlined how the U.S. might respond with its own infrastructure investment and leadership.

“It means investing in technology at home. It means having more effective economic and commercial relationships around the world,” Lew told “Marketplace Morning Report” host David Brancaccio. “And it means working with allies to make sure that high standards, whether it’s on environmental issues or on rule of law and commercial standards, are adhered to.”

The following is an edited transcript of Lew’s conversation with Brancaccio.

David Brancaccio: I’m thinking this nickname that is often used, “Silk Road,” gives the wrong impression. People think of upgrading an East-West trade route, Asia to Europe, but the Belt and Road initiative is a far-flung set of projects.

Jack Lew: Yes, it really is spread throughout the countries neighboring China, but also deep into Central Asia and Europe and South America and Africa. It’s become quite a global effort. And it’s as much about securing trade and supply lines as it is about expanding China’s presence in the world.

Brancaccio: It’s about cementing friendships and alliances, in part, right?

Lew: It is. Look, there’s nothing wrong with meeting domestic needs in countries around the world. And for much of the early years of the Belt and Road initiative, it was seen as filling a void in part created by the United States not being in all the places it needed to be. But as it’s become a mature program, and it has seen the spread of Chinese technology and influence over political decision-making, it’s really created a growing sense that there’s a need for a response by the United States — both in terms of what we do domestically, and how we deal with other countries to make sure that our interests are protected.

U.S. leadership “at home and abroad”

Brancaccio: Like what? Pay for more things like this only the U.S. would be helping to underwrite the lending?

Lew: The answer isn’t just dollar-for-dollar parity. You look at the traditional U.S. strengths — the traditional U.S. strengths are our alliances, it’s the deep base of technology and innovation, it’s the rule of law, it’s U.S. leadership. And what we need to do is make sure we project that at home and abroad. So it means investing in technology at home. It means having more effective economic and commercial relationships around the world. And it means working with allies to make sure that high standards, whether it’s on environmental issues, or on rule of law and commercial standards, are adhered to. The challenge of the Belt and Road initiative is not just a question of how many dollars are being traded. It’s a question of how the rules of the road for the future will evolve.

Lew: I don’t like to think of things in terms of Cold War analogies. I think there are many areas where the United States and China, and the United States and our allies and China, ought to be able to work together. You look at China’s commitment to “greening” the Belt and Road initiative — well, if all the countries in the world insist that that means not investing in coal-fired power plants and creating growing need for fossil fuels that are going to create more, not less emissions, that can move things in the right direction. So I think the resolution of this doesn’t have to just be direct conflict. But I think we also have to be realistic that if the United States isn’t a leader, and China is developing bilateral relationships around the world where it can meet immediate needs, countries will sign up for that. And then afterward, we’ll all look back and say, “Why didn’t the world come together and say, ‘We’ve got to do business in a different way?’ “

I think we can do better. The report outlines a number of steps, things that we can do at home to be more competitive, things we can do internationally to be more effective. And the good news is that a lot of it just goes back to the United States playing a leadership role that it has known how to play very well.

Brancaccio: On the topic of green and sustainability: Some of China’s work through these initiatives has enabled some coal-fired power plants to be built elsewhere in the world.

Lew: Yeah, a substantial amount of the resources in the Belt and Road initiative have gone into power plants, and more than 60% of China’s energy-specific financing in this area has gone to nonrenewable energy resources. So there’s a need for power in emerging economies, but there’s also a need for the countries that are financing and exporting to meet those needs to try to move the world in the right direction.

Brancaccio: You mentioned things we could do domestically. Give us a hint.

Lew: I think it starts with research and development. You can’t look at China’s success in broadband 5G technology without being struck that [the U.S. is] not on the field. We don’t have a technology. We have been the world’s leader in technology for most of the last 75 years. We need to redouble our efforts. We need to increase the amount that we spend on basic research and the kinds of activities that the federal government supports. I think there will be an opportunity as the [Biden] administration and Congress work on the “Build Back Better” program to really focus on, how do we rebuild the capacity for the United States to maintain the competitive edge on technology? That’s something that we have to do for ourselves, and I don’t think we should blame anyone if we fail to do that.

In the area of broadband, if we don’t have the technology ourselves, we need to work with like-minded countries that do have it and look for ways so that that becomes the way that countries build the architecture of their communication systems.

If the only product out there is a Chinese product, that is very much an advantage to China. This byproduct of it is that all of the information, all of the access to data, is run through Chinese companies that are either state-owned or very close to the state. And I think it’s important not just to look at this as what has China done — we have to look at what the United States has and hasn’t done, and what we, working with other countries of the world, have and haven’t done.