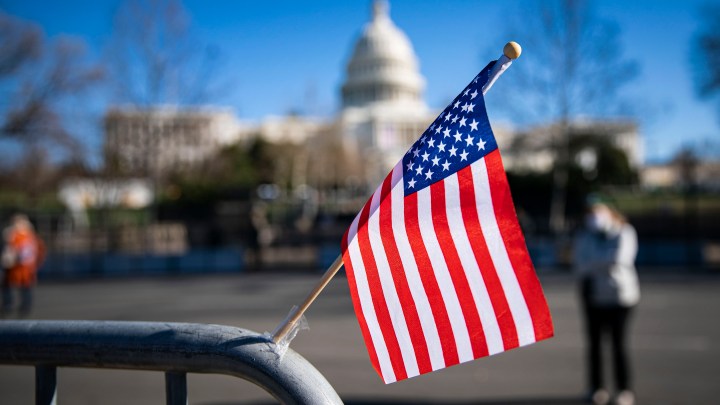 An American flag flies outside the U.S. Capitol on Jan. 9, 2021. Al Drago/Getty Images

Of the 6% that are imported to the U.S., 94% come from China. In 2012, the most recent data available, the value of U.S. imports of American flags was $4 million, while the value of exports was $781,222. Like every import, flags of foreign origin entering the U.S. must have a label that legibly states its country of origin.

But “made in America” can be a little squishy. The Federal Trade Commission states that “all or virtually all” of a product must be of U.S. origin to legally claim it is “Made in the U.S.A.” So it can be tricky to know if a flag was made entirely of American-made materials. For example, it might be manufactured in the U.S. with American-made fabric but with imported ink.

The Flag Manufacturers Association of America, however, states that its seal on a flag ensures “every step of the manufacturing process for that flag has been completed using domestic materials in U.S. facilities with U.S. labor,” according to its website. “When you purchase a flag with the FMAA Certified seal, you can be confident that your flag was not imported from another country.”

There have been several proposals in the past to require that all federally-purchased American flags be 100% U.S.-made. The most recent was in 2019, when Sens. Susan Collins and Sherrod Brown teamed up for the “All-American Flag Act.”

At the time, Collins said the rule would make sure “the symbol of our nation is preserved while supporting American jobs and manufacturers,” the Associated Press reported.

The Department of Defense is required to buy 100% American-made flags. But under current law, the U.S. government is only required to buy flags made from at least 50% American-made materials. The government can ask for a waiver if an item is too expensive, and imported American flags are often cheaper than ones manufactured in the states. The Biden administration is attempting to tighten up loopholes when it comes to the federal government buying “American made,” which could apply to American flags going forward.