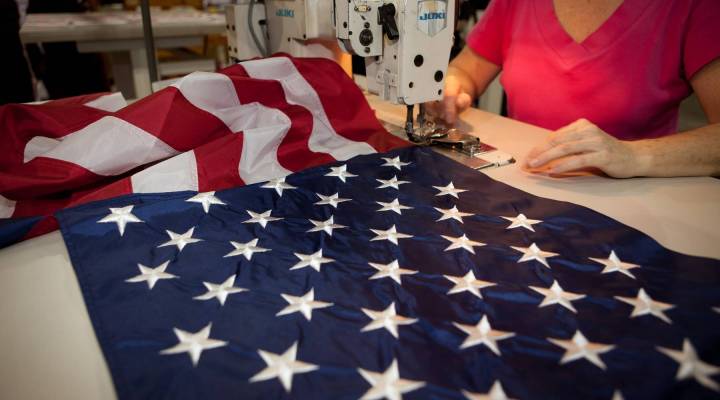 On Sunday, 23 percent of Puerto Rico’s eligible citizens went to the polls, and 97 percent of them voted to make Puerto Rico America’s 51st state. That’s about half a million people. The vote was nonbinding, and because of the low turnout, it might not be enough to persuade Congress to convert Puerto Rico from a commonwealth to a state. Puerto Rico will be holding another vote on the issue in October and hopes for a larger turnout.

One of the things that would change if Puerto Rico were to become a state is the official American flag.

U.S. federal law requires that another star be added when a new state joins the union, according to Slate. Since today, June 14, is Flag Day, we decided to find out what would it take to fit one more star on the U.S. flag.

Puerto Rico has held five other votes on statehood in the past — in 1967, 1991, 1993, 1998 and 2012. The 2012 vote was the first time that Puerto Rico voted in favor of becoming a state. Since then, Redditors have been busy trying to come up with a new design for the U.S. flag. (You can view some of them here.) Slate asked a mathematician to propose a design.

However, all their efforts might have been for naught.

It turns out that a design for a flag with 51 stars has probably been ready for the past five decades, according to U.S. flag manufacturers.

“There is process, because it’s been done before,” said Mary Repke, senior vice president of sales and marketing at Annin Flagmakers. Most recent flag update took place back in 1959, when Hawaii was officially proclaimed the 50th state. According to NPR, that flag was designed by Bob Heft, who designed the 50-star flag for a history project during his junior year in high school.

That’s a lot of stars.

The new flag was revealed that same day that Hawaii became a state — August 21, 1959. The New York Times described the ceremony and the flag as follows:

The Presidential action was followed immediately by the unfurling of a new fifty-star flag, which will not become official until next July 4. The thirteen alternate red and white stripes remain unchanged, but the stars on a field of blue are arranged in nine alternate staggered rows of six and five stars each.

As soon as the new flag was announced, the U.S. government probably started making contingency plans for a 51-star flag, according to Repke.

The public at large got a sneak peek at the potential U.S. flag earlier this year when Vice President Mike Pence visited Brussels. During his meeting with EU Council President Donald Tusk, the American flag displayed in the background contained 51 stars arranged in three rows of nine stars and three rows of eight instead of the usual nine alternating rows of five or six stars.

One, two, three … wait a second, how many stars is that?

Marketplace was unable to confirm if that is in fact what the 51-star flag would look like if Puerto Rico becomes a state.

“I personally was also surprised that it was already designed,” Repke admitted. Annin Flagmakers has been in business since 1847. It is the oldest and largest U.S. flag manufacturer. And while the company might be old, its business is modernized and as such would not really be affected by possible changes to the flag.

“The cost to make a new flag is no different than the cost of making the current flag,” Repke explained. “We do our star fields by giant embroidery machines that run off software, so we would just have to make some software change … that’s like uploading a digital file. There is no real expense in that.”

While flag makers might not incur additional costs, they could see a one-time bump in demand.

“The impact is that everybody who flies the flag — from consumers all the way to the government buildings and military — they all have to then change their flag,” she said.

Repke said she can’t estimate exactly how many flags or dollars that would amount to. Annin makes about 10 million flags a year.

“The cost is really in the time it takes to do that,” she added. “We certainly can’t produce 10 million flags immediately. We do that over the course of the year. So there is a lag time in getting the flags produced and getting the distribution. And then it’s really up to the people who fly the flags to take the time to swap out the flags.”