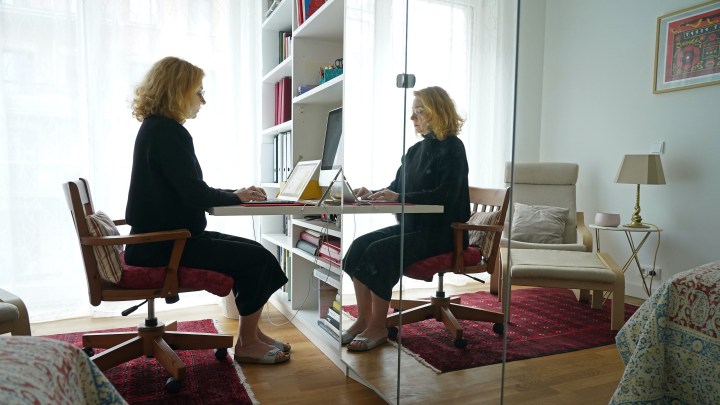 Ryan Beck got his first job out of college in October 2019 working for a life insurance company in the Lansing, Michigan, area.

At the beginning of last year, at 23, he also decided it was time to get his own apartment.

“So I had spent my money on furniture and things like that,” he said.

Then in March, his boss told him and everyone else not to come into the office.

“I was working at my dining room table, and, I mean, it gets the job done. But after, you know, a couple weeks of that, it really started just affecting my posture.”

That made Beck’s back hurt, and he wasn’t as productive. And then, he said, almost out of the blue, he got a check from his employer to cover some of the costs.

It wasn’t a lot of money — a little more than a hundred bucks — but for him, it was something.

“It was kind of like a stimulus check. And that helped me get a desk and a chair,” he said.

A new survey from the compensation software and data company PayScale found that less than 25% of organizations provided any kind of stipend to employees working from home last year.

Shelly Holt, chief people officer at PayScale, said her company provided $500 for its employees at the start of the pandemic to help with unexpected costs, but it’s going to have to account for more people working remotely from now on.

“A stipend probably isn’t the best strategy to address that,” Holt said. “That probably needs to be a longer, more comprehensive policy. And that is something that we’re trying to figure out right now at PayScale, because we do anticipate we will be moving to a hybrid environment going forward.”

Holt said as companies make some level of working from home permanent, they need to think carefully about their compensation policies because figuring out stipends can get tricky.

Lonnie Golden, professor of economics at Pennylvania State University, said for example, there’s a huge difference between an employer saying you can work from home versus that you must.

“If they are making the work required to be done remotely, one would think that that expense should be picked up wholly or at least partly by the employer,” Golden said.

But there’s a lot of gray area here. For instance, can a worker expense an electricity bill during a heat wave if they’re running the air conditioner while working at home?

“This area is, I think, going to be seeing a lot more litigation,” said Elliot Siegel, a partner at King & Siegel, an employment law firm in Los Angeles.

He said cellphones or wireless contracts have become the thing that employers will often help workers pay for, assuming they use their phone for work. But he thinks the pandemic has forced employers to rethink what qualifies as expensable.

“You could argue that essentially any cost that you incur at home has to be in some way be apportioned and taxed back to the employer,” Siegel said.

Whether you can charge your employer for part of your internet bill or get them to pay for a new printer aren’t big concerns for Matt Ivaliotes. He works in IT and cybersecurity for the credit card processing company Card X. He lives outside of Chicago and said he’s saving plenty of money working from home.

“Two hundred ten dollars a month on train fare, $55 on the bus, $40 for parking,” he said. “And then the little things you don’t think about in terms of how much of our spending was habitual based on sort of the routine of the day.” Like the coffee at Starbucks and lunch across the street from the office.

He feels like he’s making out like a bandit and also recognizes that he’s in a privileged position just being able to work from home.

Indeed, a study from the University of Washington found that about 75% of Americans can’t work exclusively from home. Folks working in health care and at grocery stores among so many others.