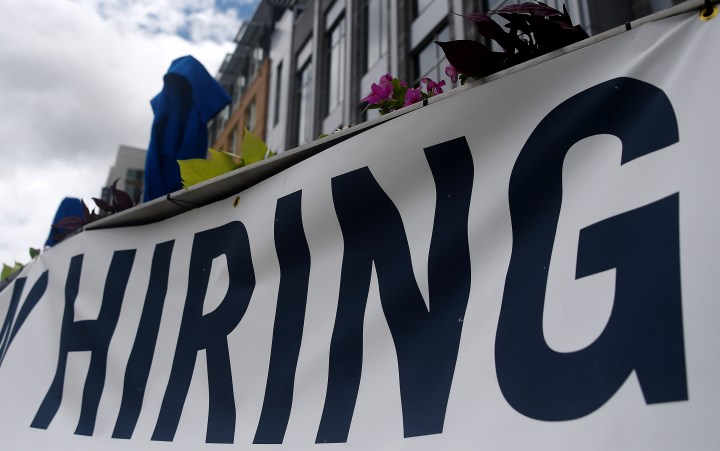 The picture we got of the jobs market this week was pretty positive: Yesterday we learned that first-time claims for unemployment were down last week by 34,000 to 310,000, the lowest since mid-March of last year.

The continuing decline in unemployment claims means there have been fewer layoffs.

But, aside from that: “Lately, there’s not a lot going right in the job market, and of course that’s all due to the delta variant,” said economist Robert Frick at Navy Federal Credit Union. He said hiring had slowed in leisure and hospitality as well as retail. And that more people were afraid of working right now.

Employers say they can’t find workers to hire as the economy reopens. “Employers are having such a hard time keeping workers, they are really loathe to let them go. So that provides job security, I think, for a lot of people,” said Frick.

Making matters worse for employers is the fact that people are quitting their jobs at high rates right now.

Adam Santaniello of Windsor, Connecticut, recently quit a call-center job after seven months. He said the money was good, but that wasn’t enough in and of itself. “I just didn’t see the difference I was making anymore, and I’m at a point where I just want to do something that makes me happy,” he said.

Like the restaurant work he used to do. Meanwhile, he’s applied for unemployment. That, and relief payments, have helped a lot of people to hold out, financially, said Jesse Wheeler, economic analyst at Morning Consult.

“That cushion will provide you the ability to refrain from entering back into the labor force, if you’re concerned about health or you need to take care of a loved one,” said Wheeler.

Employers are pulling out all the stops, said Jeramy Kaiman at global staffing firm Adecco Group: higher pay, bonuses, fast offers and counteroffers. But there are still a lot of potential workers on the sidelines. What’ll it take to get them back?

“A lot of these are people that have gotten used to working from home, and/or are still balancing childcare issues because there’s a lack of childcare workers,” said Kaiman.

One thing many economists are agreed on: prolonged labor shortages will hurt businesses’ ability to meet demand and grow.