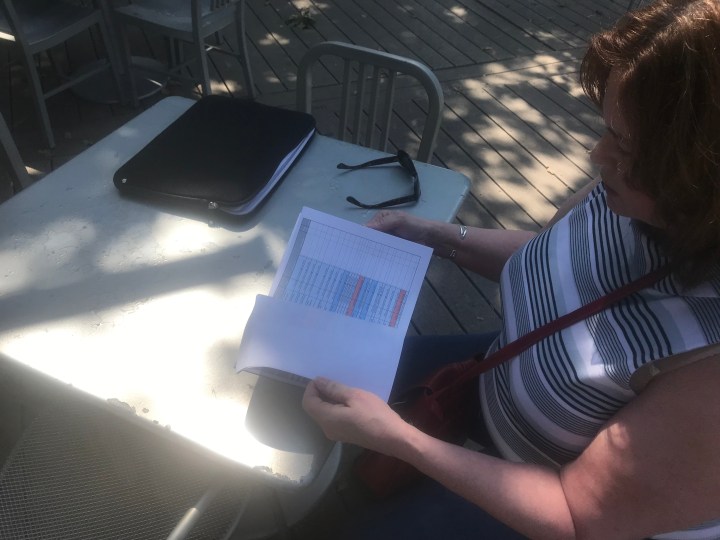 COPY
Sitting at a cafe in North Central Austin, 59-year-old quality control manager, Lisa Donahoe, keeps a color coded spreadsheet to track all the jobs she's applied for over the last three and a half months. Andy Uhler/Marketplace

Sitting at a cafe in North Central Austin, 59-year-old quality control manager, Lisa Donahoe, keeps a color coded spreadsheet to track all the jobs she's applied for over the last three and a half months. Andy Uhler/Marketplace
Listen Now

By the time I met up with 59-year-old Lisa Donahoe at a cafe in North Central Austin for lunch, she had already logged half a day of work. But she wasn’t getting paid for the time she put in.

“I set my alarm, I wake up in the morning, I go to my computer, I look at all my job matches and I go through them. And I do that all day long,” she said as she opened up her laptop.

Donahoe got laid off in mid-May from her job as a quality control manager at a tech company. She keeps a detailed, color-coded spreadsheet to track her progress. There are different colors for the jobs she’s applied for, the ones where she was interviewed but wasn’t chosen. Some are highlighted red.

“That means they didn’t contact me for an interview and they just sent me an email saying they looked at my resume but they decided to go with another candidate or a different approach,” she said. “Or the job just got closed and I never heard anything.”

In almost four months, Donahoe has applied for 39 jobs in Austin, which last month boasted a 2.9% unemployment rate. People are moving to the area because cost of living is relatively cheap and there are jobs.

Many of those qualified people are just out of college. Donahoe admits she’s worried that her age could be a deterrent to some potential employers.

She doesn’t have family members relying on her income, but she also doesn’t want to rack up credit card debt. Donahoe said if she doesn’t have a full-time job with a decent salary by the end of the month, she’ll piece it together with part-time gigs.

“If I have to do four jobs to make ends meet then that’s what I’ll do.”

Down in Southwest Austin, 43-year-old Chris Winne has also been putting in time looking for a job. He said until recently, he was out of work by choice.

“I have been a stay-at-home dad for about ten years,” he told me as we both took a seat at his high-top dining room table. “Before that I got a Ph.D. in ecology. The plan was to be a professor somewhere.”

Winne said he could afford to stay at home with his two sons because his wife was making good money as a physical therapist.

Now, they’re divorced and he needs to work. He’s been looking for a full-time job in the tech industry for about six months and is frustrated that his expensive education isn’t really helping.

“HR departments aren’t necessarily curious about whether or not I have a Ph.D. from 2008 that I haven’t really been using,” he said. “It’s essentially been sitting there collecting dust.”

He also knows employers are leery of someone who has been out of the workplace for so long.

“I feel like most HR departments are wanting to know what have you been doing the last few years and they maybe are taking the safe road and hiring somebody straight out of college or somebody who has been doing the exact same thing and they’re making a lateral transition,” Winne said.

Now, he has a new plan. Winne is currently enrolled in a program to get his high school teaching certification, but that’s going to take a while, so he’s hoping something else comes along. To stay afloat financially, Winne tapped into the equity in his house and is working as a substitute teacher and as a waiter at some private events when he can.

“I think there’s a lot of vulnerability and shame in letting people know that you’re having a hard time getting a job,” he said. “It would be a lot more satisfying to just show up to a job and have colleagues that you’re working with than it is to sit at home and apply for jobs.”

Winne knows the job market is supposed to be favorable right now. He said he even hears people saying, “If you want a job, you can get one.”

He’s just trying to figure out how that’s supposed to work for him.