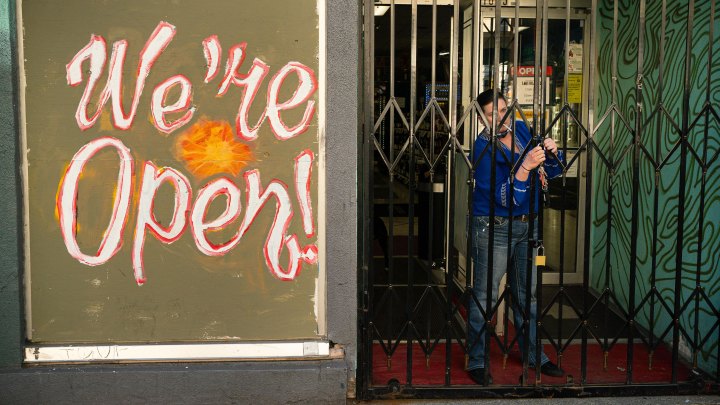 COPY
A woman closes up a liquor store in Seattle in July. Job searchers are having a hard time finding work during the pandemic. David Ryder/Getty Images
COVID & Unemployment

A woman closes up a liquor store in Seattle in July. Job searchers are having a hard time finding work during the pandemic. David Ryder/Getty Images
Listen Now

While politics dominated the news last week, we got a dose of reasonably upbeat economic news — the monthly jobs report.

Unemployment fell in October to 6.9%, and people have been coming back into the workforce after losing jobs or giving up on looking for one earlier in the pandemic.

But looking for jobs isn’t getting any easier.

And Tuesday’s JOLTS — or Job Openings and Labor Turnover Summary — from the Bureau of Labor Statistics for September is evidence. Job openings were up a bit, but still much lower than at this time last year.

We checked in with some job seekers to see how it’s going out there.

The key stat right now when it comes to finding a new job? There are nearly twice as many job seekers as there are job openings.

That’s what 29-year-old Dana Marlin is up against. She’s been looking for a new job in sales since she was laid off in March from a company outside Chicago that puts on marketing events.

Marlin said she has had a lot of interviews but no offers.

That’s also how 26-year-old Bailey Tripp’s hunt for a new digital marketing job is going in suburban St. Louis. And she said COVID-19 is a concern even if she does get an offer.

“I’ve had interviews where they’ve made it very clear that as a new employee, I’m expected to be in the office for a time,” she said. “That’s made me uncomfortable. But I have to balance finding a job and accepting something versus my own safety.”

And slogging it out in this pandemic-afflicted job market isn’t for everybody.

Amy Wilson, 38, lives in Longmont, Colorado. She’s worked as an office and operations manager. She and her husband were laid off in early spring, and she launched her job search as the economy started reopening in May.

“But [I] just was not having much luck. Hiring was depressed; I wasn’t getting the callbacks for the kinds of jobs that I wanted,” Wilson said. “[I] kind of just made this decision to go back to school instead.”

She’s taking classes and aiming to have her associate’s degree in communications by this time next year.