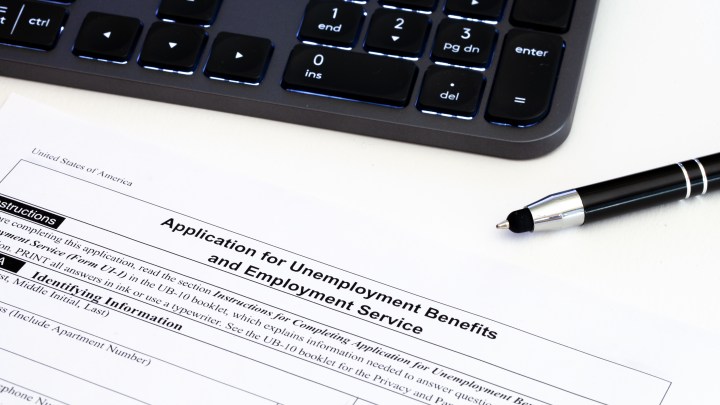 COPY
Despite layoffs at big tech and finance companies, first-time jobless claims recently fell to 190,000 — a level rarely seen since the pandemic hit in 2020. Eblis/Getty Images

Layoff announcements have been coming thick and fast from tech and financial firms lately — Google, Microsoft, Goldman Sachs, Amazon, Salesforce. All are cutting jobs as the economy slows down, after hiring strongly in the two years of pandemic economic recovery.

At the same time, the U.S. unemployment rate fell back to 3.5% in December, a 50-year low. First-time claims for jobless benefits have fallen in recent months, sliding to 190,000 in the week ending Jan. 14 — a level rarely seen since the pandemic hit in 2020.

Typically, when the economy slows down and companies respond by laying off lots of workers, claims for unemployment compensation spike; it’s happened before with recessions looming.

But not this time, said Michele Evermore, a senior fellow at the Century Foundation. “I think there are actually good reasons why there might not be initial claims associated with a lot of these layoffs,” she said.

First, in spite of recent layoffs, Evermore said the job market is still very tight. There are lots of openings and jobs are still being created at a brisk pace, especially for service workers in the leisure and hospitality field as well as health care.

“The unemployment rate is incredibly low,” Evermore said. “I think people have high confidence that they’ll find another job relatively quickly, so they don’t go through the unemployment insurance process.”

Then, there’s all the trouble people had dealing with outdated and overwhelmed unemployment systems during the pandemic.

Trying to get unemployment benefits is time-consuming. Not everyone who loses a job is eligible, and to keep receiving benefits, you have to jump through hoops, like proving every week that you’re actively looking for a new job.

All that was on Marissa Cheves’ mind when she lost her tech job last year in Portland, Oregon. “I’m a game developer on the Roblox platform,” Cheves said. “I do all sorts of modeling, graphic design, game design.”

The 22-year-old has been laid off twice in the last two years as the startups she was working for downsized. The first time, she wasn’t eligible for unemployment because she’d been working as an independent contractor. The second time, she decided not to apply so she could keep her options open.

“There’s always openings, and I see them,” Cheves said. “But you know, since my last two experiences with startups, I’m really not finding myself inclined to apply for them.”

That idea — that even amid layoffs, there are lots of job opportunities — is especially relevant for Cheves and other workers in tech, where a lot of recent job cuts have been concentrated, said Morning Consult’s Leer.

“Workers are being reabsorbed elsewhere in the economy,” he said. “These higher-income workers tend to be fairly highly skilled, which is allowing them to go back and reenter the workforce as soon as they’re laid off.”

In many cases, those workers find a new job before they get around to — or even feel the need to — apply for unemployment.

Andy Challenger points out that laid-off white-collar workers are often sent packing with perks. “Lots of job cut announcements from tech firms are also announcing really generous severance packages and benefits for people as they depart.”

In many states, if you take the severance, you forfeit the unemployment.

“You see a lower percentage of people at the high end of the income distribution filing for unemployment,” Challenger said, “because they either don’t have the time, the patience or the really deep need to file unemployment claims.”

That’s pretty much where Marissa Cheves finds herself now. Nine months after losing her game-development job, she’s plenty busy — developing a new Roblox game with a few of the former co-workers she was laid off with.

“It’s a dieselpunk game, inspired by World War I and World War II aesthetics, so there’s gonna be a lot of trench digging,” she said. “I’m really excited for it.”

For now, Cheves is relying on savings and living frugally.

“I’ve definitely considered getting a part-time job somewhere just to supplement my income and to help fund the project,” she said. But so far, she hasn’t considered knuckling down and applying for unemployment.