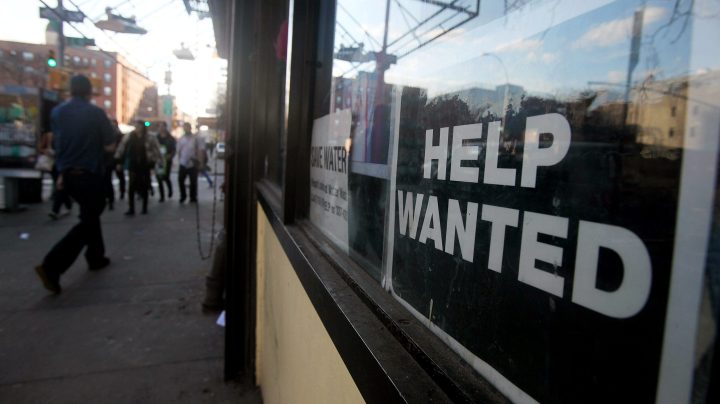 COPY
The number of 16- to 19-year-olds who work jumped to 31.9% in June from a year earlier, according to the Bureau of Labor Statistics. Mario Tama/Getty Images
My Economy

The number of 16- to 19-year-olds who work jumped to 31.9% in June from a year earlier, according to the Bureau of Labor Statistics. Mario Tama/Getty Images
Listen Now

As pandemic restrictions relax, business reopen and employers struggle to staff up, teenagers are flooding the job market to fill a the labor gap.

The number of 16- to 19-year-olds who work jumped to nearly 32% in June, according to the Bureau of Labor Statistics, compared to about 25% a year earlier, when the pandemic cut off millions of lower-wage opportunities. In the 1970s, teen employment was nearly 50%.

“I think I wanted to work, you know, start saving up, so, like, I’ll be good for when I enter college,” 18-year-old Yahir Parada said.

The recent high school grad from Denver said he’s been working as a lifeguard for the city’s parks and recreation department for a few years now, and he said money wasn’t the only reason he looked for a job.

“I think I was mainly, like, looking for more experience and connections that I will be able to use in the future,” Parada said.

Anesia Woods, 17, from Crowley, Texas, just earned a high school equivalency diploma and is training to become an after-school program director at her child care job. Woods said she was thinking about what her earnings could mean for her family.

“I have 11 siblings, so it was kind of hard growing up, like, food situations and clothing for all of those children,” Woods said. “I do want to support them, so I’m just trying to encourage them to, like, achieve greatness.”

Parada said he makes $15 an hour at his lifeguard job, and he’s satisfied with the pay for now.

“When I started lifeguarding, I got paid around like $11 an hour, and it didn’t really move up to like after a couple of months after I was working,” Parada said.

Woods said she makes $11 an hour in her position. And while she’s comfortable with the wage for now, she’s planning on earning more in the future.

“When I get older, I plan on, like, looking for something that has a better amount of money,” Woods said. “But I’d rather do what I love and make less money than to do something that I don’t like.”