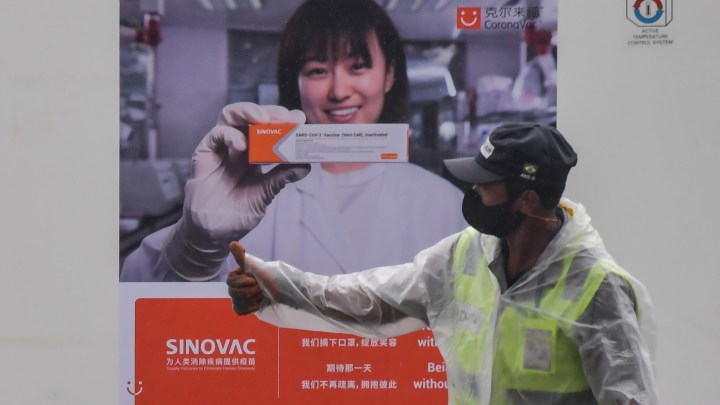 COPY
A container of vaccines developed by China's Sinovac is unloaded near Sao Paulo. The treatment was recently approved by health authorities in Brazil, though some people are skeptical of the Chinese product. Nelson Almeida/AFP via Getty Images
COVID-19

A container of vaccines developed by China's Sinovac is unloaded near Sao Paulo. The treatment was recently approved by health authorities in Brazil, though some people are skeptical of the Chinese product. Nelson Almeida/AFP via Getty Images
Listen Now

China has been moving aggressively to promote its COVID-19 vaccines around the world — to provide a public good, boost its pharmaceutical industry and gain allies. This week, one of its vaccines begins rollout in Brazil, a country that has suffered more than 200,000 COVID fatalities.

For Beijing, there is opportunity — and risk — in this moment in the global spotlight. The Chinese vaccine received authorization in Brazil on Sunday, as health systems there have been collapsing. Reports from the vast state of Amazonas indicate some COVID patients are dying of asphyxiation.

“They don’t have oxygen in the hospitals,” said Dr. Adriano Massuda, a health management professor at the Getulio Vargas Foundation and a former Brazilian health official. “Not only for COVID, but also for babies. So the government needs to transport babies to other states.”

He blames the cases largely on Brazilian President Jair Bolsonaro, who — and this may sound familiar — has consistently undermined the advice of public health leaders, including the minister of health.

“The president said, ‘This could hurt our economy, so we can’t maintain this orientation from the ministry of health,’ ” Massuda said. “So he changed the minister.”

On Sunday, Brazil authorized a Chinese vaccine from the drugmaker Sinovac along with the Oxford-AstraZeneca vaccine.

Sinovac, in fact, tested its product in Brazil, among other countries. Because the virus was spreading quickly there, it was easy to gather data on whether the vaccine could prevent COVID-19. Whereas in China, there were not enough cases for large-scale drug trials.

“Since they don’t have many COVID patients, they have to work with other countries,” said Jennifer Bouey, a China policy researcher at the Rand Corp. think tank. “So I think that helps with the transparency and the validation of their trials.”

It’s also an opportunity for Sinovac to shine around the world. Bouey said China’s pharmaceutical industry is still in its developing stages, and a successful COVID vaccine campaign could catapult the sector to global relevance.

“Pharmaceutical products from China are not common and accepted by the global market,” Bouey said, “but COVID-19 might be a game changer there.”

A game changer for both China’s industry and its geopolitical efforts to win friends. At the Center for Strategic and International Studies, Southeast Asia senior fellow Greg Poling noted Beijing recently agreed to ship vaccines to its neighbor Myanmar.

“And at the same time, they announced that they’re going to restart work on what’s called the China-Myanmar Economic Corridor,” Poling said. “Nobody comes out and says, ‘We’re going to give you vaccines so you greenlight this construction,’ but it’s awfully coincidental.”

“They were rather heavy-handed about the political strings attached,” Poling said, “demanding photo ops with leaders and statements of gratitude.”

The Chinese vaccine charm offensive is not a sure winner, though. For starters, Bolsonaro is a known basher of all things China.

“The president has tried to promote an anti-Chinese sentiment,” Oliver Stuenkel, international relations professor at Getulio Vargas in Sao Paulo, said. “Suggesting that China, you know, is not transparent, that you cannot trust the Chinese vaccine.”

It didn’t help that Brazilian science leaders appeared to botch the public announcement of the Sinovac vaccine. In early January, they deemed it 78% efficacious. One week later, they put out an efficacy rate of 50%.

“A lot of people I have spoken to say that they’d much rather prefer to take another vaccine, ideally from the United States or Great Britain or Germany,” Stuenkel said. “And they’d like to avoid having to take the Chinese vaccine.”

Brazilian officials insist the Chinese vaccine is highly preventive against severe COVID cases, and Sinovac’s drug trial numbers seem to back that up.
Still, the whole drama could damage the China brand.

“China is obviously facing a bit of an uphill battle in many countries because of perceptions, and realities, about how the outbreak was handled in the early days,” said Alexandra Phelan, professor of global health at Georgetown University. “And that’s flowing on into how these vaccines are perceived.”

If things don’t go well for the Sinovac vaccine — if it’s rejected by Brazilians or found to be ineffective — China and its companies may not be the only casualties. Phelan said China vaccine skepticism could hurt the global effort to end the pandemic.