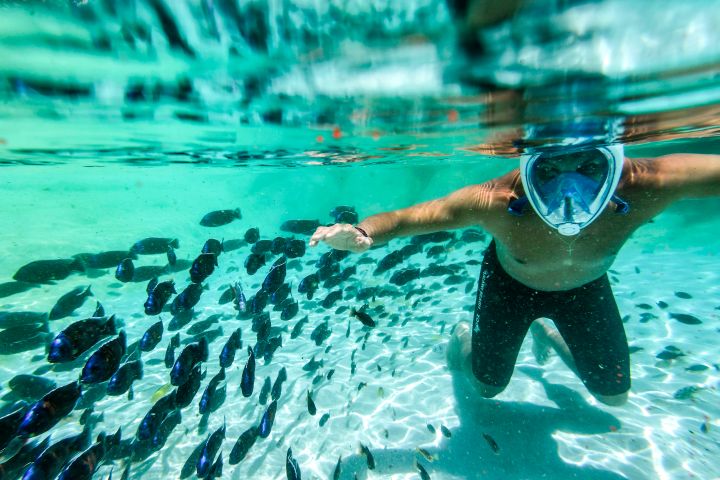 Due in large part to the state economy’s dependence on tourism, an industry that has been hit particularly hard by the pandemic, Hawaii’s unemployment rate is 10.1%, according to the most recent data from the Bureau of Labor Statistics. That’s more than 3 percentage points higher than the national average. Marketplace host Kai Ryssdal spoke with Manu Powers, co-owner of Sea Quest Hawaii, a Big Island business that offers boat tours in the area, about what the past few months have been like for her town and her company. The following is an edited transcript of their conversation.

Kai Ryssdal: This is the standard first question when I talk to a small-business owner: How is business?

Manu Powers: Business is poor. Business has dramatically decreased, let’s put it that way. And I would go so far as to say that’s an understatement. And we are operating currently this week at about 5 percent. And that isn’t, definitely not enough to sustain us. It’s been a painful year, to say the very least.

Ryssdal: Yeah, I’m sure. This, this question of being able to sustain you. You have been going through this pandemic now, as the rest of us have, for 10 months. You were as I understand it closed for a number of months entirely. How much longer can you keep going?

Powers: I would say, thanks to, you know, some of the government funding that was made available to us, and we were quick to act on that, we could probably sustain until the fall at this rate. And I think that that’s much better than most have fared through this. When we purchased Sea Quest in 2015, the company had eight employees. And when we shut down in March of 2020, we had 44 employees, and business was doing 600% what it had been when we first started. So our business model was based on that growth. So when business was completely shut down, the model was thrown out the window, and it became survival mode. When you’ve got a town that is entirely dependent upon tourism one way or another, you’re looking at a very difficult time for the residents. And hopefully we survive this.

Ryssdal: The 35-ish or so people that you’ve had to lay off or let go. What are they doing now, do you know?

Powers: A lot of them have moved away. Some of them are hanging in there, you know, living off unemployment, hoping for another stimulus package like we just got, so there’d be an extension of their benefits. But it’s tough. Even my husband, he’s even taken a side job to support us through this because of course, we had just purchased a home and a mortgage that was equivalent to what our income was at that time. And so now we have to sustain that. You know, we hope to walk out of this with our home and our assets in place. In other words, our boats, the building the boats are in, etc. Whether we’re able to do that, we’ll see.

Ryssdal: Yeah, on the topic of you and your husband taking on other jobs, tell me about your reservations person and what it meant to you to be able to hire one. And then I’m gonna guess now you don’t need that person anymore.

Powers: Right. So you’re speaking to the reservations person at this time. Whereas right before the pandemic, we had full coverage, and that was a real milestone for us psychologically, emotionally. And so now we’re glued to the business again. And that can be really stressful. We have three young children. We’re high-school sweethearts, so I think that we’re going to make it. Check back in six months. But we have had stress placed on us that we could have never imagined. And so we’re trying to stay positive, and that’s how we see this. This is an opportunity for us to get back into the business, dig deep, really figure out some new strategies. And then, next, to diversify. If we’ve learned anything, it’s that diversification is critical. And hopefully, should we ever face something like this again, there will be multiple revenue avenues for us to fall back on.