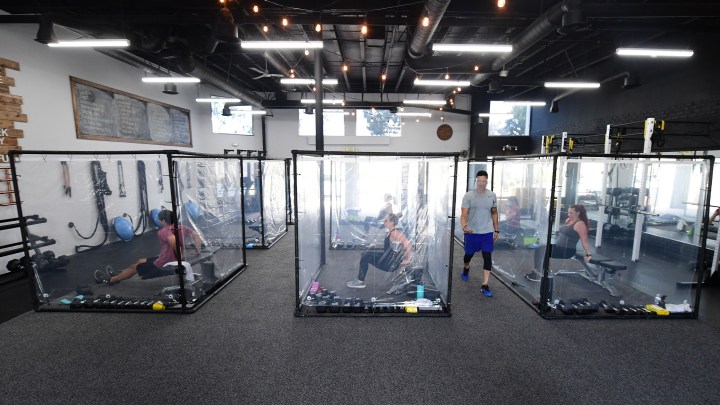 It’s a familiar sight at the gym on New Year’s Day: The treadmills and weight rooms are packed with people who vowed that this is the year they’re going to start exercising.

And then, eventually, they stop going and forget to cancel their memberships. The fitness industry typically gets a big bump this time of year. But this is the industry’s first New Year in a pandemic. How have those businesses adapted this year, and what are they expecting in January?

Bill Lia, who owns a chain of four gyms in upstate New York called Vent Fitness, said despite the pandemic, on New Year’s Day, “I think that the demand will be there. People will want to come back.”

They’ve been coming. Lia said about 60% of the gyms’ members have returned.

But gyms in New York are only allowed to open partially — in his area, at a third of the normal capacity.

“In one of our clubs yesterday, we had a line of probably 10-15 people outside that wanted to come in, but we were at our capacity limit,” he said. “So before we could let someone in, we had to have someone leave.”

Meanwhile, Michael Apuzzo, a personal trainer in New York City, is expecting to be busy this January. He teaches Pilates and dance virtually.

“I’ve actually been really busy already,” he said. “December has been my busiest month so far. It’s almost like because people are at home more, they’re ready, willing and able to work out. And people’s schedules tend to be more flexible, including my own.”

The virtual classes are not quite as lucrative as the ones he taught in person, so he’s not making as much money. But he said he doesn’t mind for now, as long as he can cover his expenses.

One part of the industry that has had a great year? The companies that sell at-home exercise equipment, like NordicTrack, which makes treadmills and bikes that cost about $1,000 and up.

The company’s sales usually jump at predictable times: the holidays. New Year’s. The week after Super Bowl Sunday, “because people have had too much beer and too much guacamole,” said Colleen Logan, NordicTrack vice president of marketing.

But this year, the only trend is up.

“In March, our sales were up 200% versus the previous March,” she said.

“And they’ve pretty much stayed at that unprecedented level,” she said. “For us, it was like January sales in July and then all the way throughout the fall.”

So this January, Logan is expecting more growth.