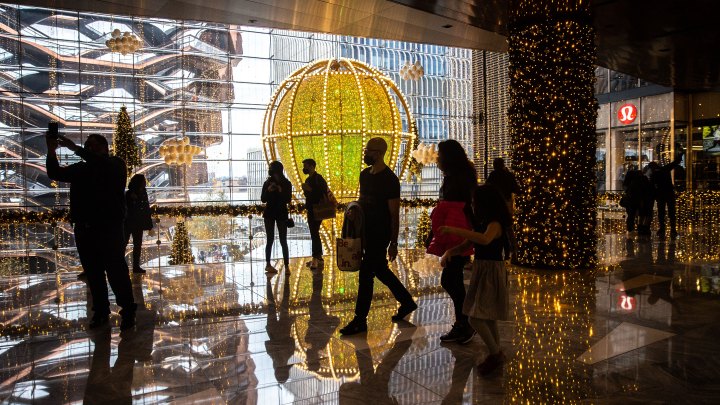 Wednesday got started with some sobering news about the state of this economy, courtesy of the Commerce Department. Consumer spending fell nearly half a percent last month. That’s the first time it’s fallen since April, back in the early days of the pandemic.

That’s not terribly surprising, given that at the same time, personal income also fell by a little over 1%.

That’s the third decline in four months, and there’s no mystery here, either — government aid has been keeping millions of people afloat and government aid is running out.  So what does that really mean going forward?

This time of year is normally when people spend more money.

Carl Tannenbaum, chief economist at Northern Trust, said the fact that personal income and consumer spending dropped in November is a bad omen.

“It does give a pretty good sense that households are not going into the new year in very strong shape, and adds to the urgency around the negotiations in Washington,” he said.

Consumer spending crashed in March and April, but then bounced most of the way back largely thanks to government aid.

“Back in April, after the CARES Act, there was a huge pop in personal income,” said Ted Rossman, an industry analyst at CreditCards.com. “And a lot of that did trickle down to other sectors of the economy.”

He said over the summer, a lot of people felt like things were getting better. But now?

“Maybe those unemployment checks have dried up, they’ve long since spent their first stimulus check. Maybe they’re not able to go back to work,” Rossman said.

And people are nervous after months of uncertainty over whether the federal government would provide more relief, said Tim Quinlan, senior economist at Wells Fargo.

“It takes a long time to build up consumer confidence and not so long to disrupt it or to shake it,” he said.

And when people have less confidence and income, they’re less likely to spend their money. Tannenbaum at Northern Trust said that is a bad combination.

“The spending done by households accounts for almost 70% of our annual gross domestic product, our national income,” he said.

And if it’s not recovering, Tannenbaum said, neither will the economy.